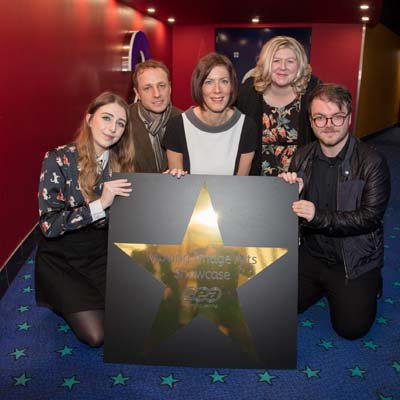 It was lights, camera and action as Northern Ireland’s young film-makers showcased their creative skills at this year’s Moving Image Arts Showcase.  The annual 2-day event brought a range of films that included ‘edge of your seat’ horror films, to laugh out loud comedies, space travellers and mice detectives to the big screen!

21 students from across GCSE, AS Level and A Level saw their work screened this week at the Brunswick Cinema, Derry~Londonderry and, for the first time, at Odyssey Cinemas, Belfast.

CCEA’s CEO Justin Edwards commented: “This week we celebrated the work of some of Northern Ireland’s most creative young film makers.  Each showcased film demonstrated the exceptional level of hard work that the students put into CCEA’s Moving Image Arts examinations. The work showcased is a credit to the students, their imagination, creativity and skills and we are delighted to be able to provide them with this platform to share their stories with us. Moving Image Arts equips students with the much sought after key skills required for many future career paths. Highlighting the importance of sustaining a curriculum choice throughout a student’s educational journey.”

The only qualification of its kind in the UK, CCEA Moving Image Arts has grown in popularity over the past ten years, with over 1500 students annually taking the course across both A level and GCSE.

Commenting on support for the Moving Image Arts Showcase, CCEA’s Subject Officer Ingrid Arthurs commented: “The Moving Image Arts showcase would not be possible without the continued support of our industry partners – Foyle Film Festival, City of Derry Crystal, NI Screen, Cinemagic and Odyssey Cinemas.  Their support makes it possible to celebrate the work produced from this unique qualification and shine a spotlight on the creative skills that sits within our schools.  We are also so pleased that many film professionals took the time out of their busy schedules to recognise the work of Moving Image Arts students.

This year there are six competitive categories, with each of the films shortlisted being of an outstanding standard.  The high quality is not only a testament to the students but also the dedication and support provided by their teachers. Congratulations to all.”

Bernard McCloskey, Head of Education at Northern Ireland Screen and chair of the judging panel commented: “Congratulations to all the students who have had their work screened at this years’ Moving Image Arts Showcase, you all have so much to be proud of. Northern Ireland Screen is privileged to have worked so closely with CCEA in the development of the Moving Image Arts qualification and to support the annual showcase.

Northern Ireland Screen’s education work has focused on developing creative skills for young people that can be used across the world of work, and in particular, the creative and screen industries. Coming up with new ideas, decision-making, teamwork and meeting deadlines are key skills that every employer looks for. Moving Image Arts provides all these skills and has proved to be a great starting point for many young people wanting to develop careers in this exciting area.”

Each shortlisted film was selected by a panel of experts, which included representatives from Foyle Film Festival, Northern Ireland Screen, Cinemagic and CCEA. It is sponsored by City of Derry Crystal.

The winning films were chosen for their strong production values, story, originality and audience appeal.