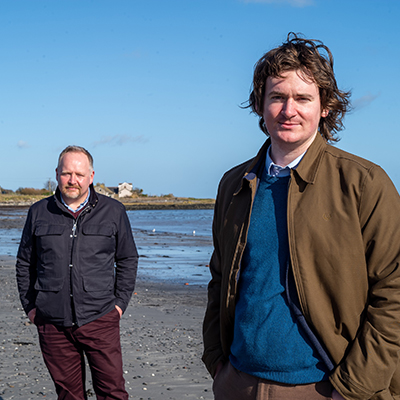 In Whiskey Talkin’ broadcaster Mark Thompson teams up with historian Dr Fionnan O’Connor to discover the fascinating, and almost forgotten story of what was once the greatest whiskey industry in the world. Produced by Northern Star Pictures Production with support from the Ulster-Scots Broadcast Fund, Whiskey Talkin’ airs on Sunday 30th May at 10pm on BBC Two Northern Ireland.

Irish whiskey is now enjoying a 21st century renaissance, with the fastest growing spirit sales in the world. Once a global player, whose industrial success was almost forgotten, it is a drink with a chequered past.

Rogues and rebels, migration and moonshine, taxes and temperance – they’re all part of a fascinating story that’s shared between Ireland, Scotland and America.

Ulster and Northern Ireland are at the heart of this story – from the Kingdom of Dalriada and the poitin masters of Donegal, to Northern Ireland’s 21st century pioneers, currently resurrecting the brands and blends once counted among the most famous whiskeys in the world.

Though Belfast’s industrial golden age is more often associated with ship building and linen production, they reveal just how significant a role whiskey had in the growth of Belfast, where the industry once employed thousands – and generated millions.

The film uncovers forgotten links between Ulster’s whiskey makers, and our neighbour across the narrow sea, revealing just how much Scotland’s whisky story owes to the north of Ireland, and looking back to a time when Irish whiskey exports outsold Scotch by three to one.

Graphic designer Mark’s fascination with branding and advertising opens a door on our industrial past, as he discovers just how much the story of whiskey connects with the history and heritage of the Ulster-Scots.

From a tiny craft distiller in the Mournes to the historic home of old Bushmills, Mark and Fionnan explore a broken history, meeting with the enthusiasts who are rediscovering forgotten recipes and re-creating some of the great spirits from Irish whiskey’s golden age.

Whiskey Talkin’ is also available to watch on BBC iPlayer