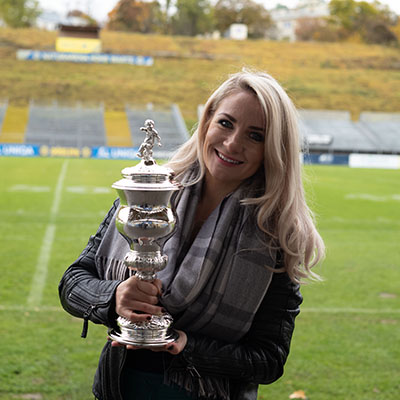 In a new Ulster-Scots Broadcast Fund documentary, Belfast’s Victory in Vienna: A Footballing Odyssey, presenter Holly Hamilton and author – and lifelong Glentoran Football Club fan – Sam Robinson explore the fascinating story of the 1914 football team who won the inaugural Vienna cup. Made by Clean Slate, the documentary airs on Monday 2nd May at 10:40pm on BBC One Northern Ireland.

In 1914, Glentoran – a group of part time footballers working men who worked in the city’s shipyards – were one of the most successful teams in Ireland after battling against the odds to be crowned Europe’s first champions.

On the eve of World War One, the team left home to play in a tournament against Europe’s leading football teams. Most had never left these shores before this once-in-a-lifetime trip to Vienna, the cultural and entertainment capital of Europe.

Over one hundred years later, Holly and Sam retrace this incredible journey and explore how nothing, from an infamous pub crawl to a missing goalkeeper, would stand in their way of lifting what was arguably the first European Cup.

Glentoran’s tale of the underdog going all the way in Europe’s top competition barely registered in the newspapers of the day back in Belfast, but the Vienna Cup still has pride of place in the Oval’s board room.

The achievements of these men, some who then left Belfast for the trenches of World War One, remains an important part of the club’s history and folklore.