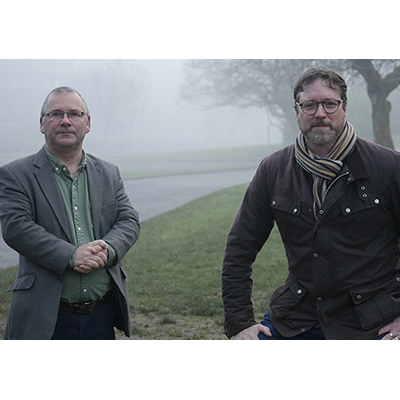 In a new Ulster-Scots series entitled Afeared, historian David Hume and writer Darren Gibson investigate the true events behind the ghost stories associated with one of Ulster’s most haunted houses, Sharon Rectory in Donegal. The three-part series begins on Sunday 31st January on BBC Two Northern Ireland at 10pm, and is an Alleycats TV production, made in association with the Northern Ireland Screen Ulster-Scots Broadcast Fund.

David Hume and Darren Gibson unveil the story of a double murder at the site in 1797 and go on to uncover why this violent event became such a dramatic flash point in Ulster-Scots history. Using original newspaper archive from the time and the testimony of current residents, the pair piece together this grisly tale of mystery, murder and rebellion with some unexpected results and altogether spine-tingling revelations.

During the second programme, David Hume and Darren Gibson visit Galgorm Castle to investigate the life of one of its most infamous owners – a clergyman from the 17th century named Alexander Colvill, who was plagued by rumours of witchcraft and devil worship. In their quest to seek the truth behind these tales, they discover amazing, primary evidence from the time shedding new light on this mysterious part of Ulster-Scots history. While visiting Galgorm, Darren speaks to the current owner of the castle about Colvill’s life and the ghost stories that continue to linger around this original plantation estate.

In the third and final programme in the series, Darren Gibson and David Hume join together to investigate the ghost story that is associated with Ballygally Castle on the Antrim coast and the real woman who has inspired this tale for generations, Lady Isabella Shaw. Their journey takes them to Ballygally Castle itself and to the ‘ghost room’, which is rumoured to be haunted by Lady Isabella. David and Darren also delve into the archives to find out more about her life in Ulster after settling here from Scotland in the 17th century. On their journey they make a very exciting discovery and shake up the narrative that has existed for centuries in Ulster-Scots folklore about the life and death of this fascinating woman.

The series airs on Sunday 31st January on BBC Two Northern Ireland at 10pm and is available to watch on demand on BBC iPlayer.