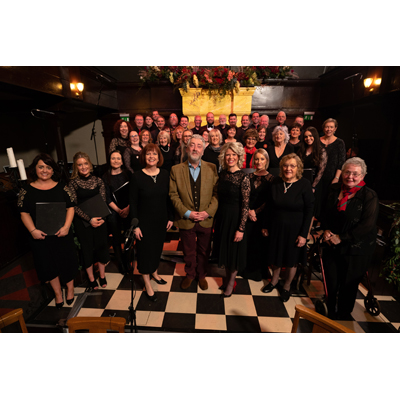 A new two-part series, Singing the Messiah, follows a community choir on the Ards Peninsula as they prepare to perform Handel’s Messiah – one of the most famous pieces of classical music in the world.

A firm festive favourite, it is performed by choirs every Christmas and has been translated into many languages. However, it has never been performed in Ulster-Scots, until now.

The two-part series follows composer and musician Neil Martin as he creates a community choir on the Ards Peninsula for a special Christmas performance of Handel’s Messiah in Ulster-Scots.

This September Neil embarked on his new challenge with the help of two local choir directors – Diane Holt and Claire Buchanan – starting with a nerve-jangling day of auditions.

Filmed over a six-week period the series follows the selected choir members as they prepare for their special Christmas performance of extracts from Messiah, staged at The Portico of Ards, in Portaferry in front of a local audience.

Made up of 36 people, with an age range from 16-80 years-old, the choir includes people from towns and villages across the peninsula, including Portavogie, Cloughey, Portaferry, Newtownards and Greyabbey.

While the choir had some local native Ulster-Scots speakers, for the majority of singers it was their very first experience of the language and with only six weeks to rehearse for the final performance.

The first episode follows the formation of the choir through to their first three rehearsals, introducing some of the contributors, such as Mechelle Caughey and her daughter Charlotte.

Episode Two follows the choir through their final rehearsals as they prepare for the Christmas performance in The Portico.

The series will also be available on BBC iPlayer.