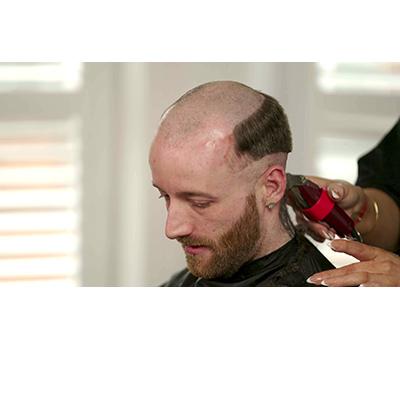 Male pattern baldness affects around half of all men by the age of 50, typically starting in the late twenties to early thirties. It can be a hugely traumatic life event – made even more devastating – because most men simply refuse to talk about it. The urge to ‘man up’ and the fear of being seen as vain or vulnerable means a lot of guys simply suffer in silence.

But it doesn’t have to be this way.

Now help is at hand in Barbershop for Bald Men, an exciting new television format from local indie, Stellify Media, the makers of Beauty Queen & Single, Blind Date and Who Wants To Be A Millionaire. This TX pilot will broadcast on BBC Northern Ireland, with a view to networking the format and taking it to series at a later stage.

In Barbershop for Bald Men, we invite guys who have experienced hair-loss to share their stories before undergoing an astonishing transformation…

Using the latest in cutting edge Hair Replacement Systems, stylist to the stars Keris Weir, (winner of the E4 TV series Great British Hairdresser in 2011) fits each man with the hair system and tops it off with a haircut of their dreams. They arrive bald. They leave with a full head of hair.

No one chooses to go bald – but the purpose of Barbershop for Bald Men isn’t to give the guys their hair back – it’s about giving them their choice back.

The only question is – will they keep their new hair? Or finally embrace the realisation that bald is also beautiful?

Kieran Doherty, joint CEO and Co-Founder, Stellify Media said:  Whether you are gifted with luscious locks or are follically challenged, this show presents all sides of the debate around hair loss and will be entertaining and informative for all.”

Eddie Doyle, Head of Commissioning BBC NI said: “Positivity and compassion are at the heart of Stellify’s exciting new format Barbershop for Bald Men. This innovative show deals with the stigma and complex emotions surrounding hair loss in young men, in a wonderfully thoughtful and uplifting way”

Barbershop for Bald Men is a 1×30 min TX Pilot, produced by Stellify Media for BBC Northern Ireland. It was commissioned by Eddie Doyle, Head of Commissioning at BBC NI and will air in late March 2021.  It was produced by Tom Pegg, directed by Joe Campo, and exec produced by Tracie O’Neill for Stellify Media.