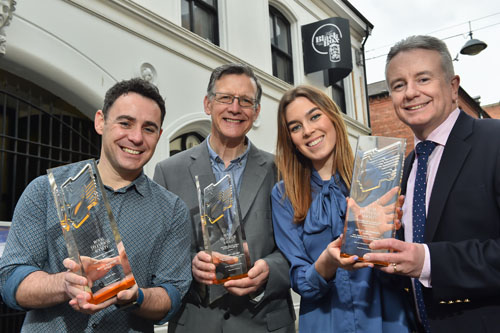 In partnership with Northern Ireland Screen, the RTS NI Student Television Awards recognise the importance of education within the growing creative industry sector in Northern Ireland.

“This is the 6th year of our Student Awards and we have consistently showcased brilliant talent at post and undergraduate level in all manner of disciplines that go into telling great stories, highlighting the exceptional talent emerging from our third level colleges.

“The RTS is first and foremost an educational charity and these awards enable us to celebrate burgeoning talent whilst providing the students with a high-profile platform to show their work.  We have built-up a strong relationship with the local colleges, which play a vital role in ensuring our future talent graduate with the necessary skills ready to start work in the exciting and growing creative industry we now have in Northern Ireland.”

“Northern Ireland Screen is delighted to be able to support these awards in partnership with RTS NI. The awards are a great way to nurture and encourage the fantastic emerging creative talent we have here in Northern Ireland.”

“Winning an RTS NI Student Television Award gives our young people a prestigious accolade to help them with their future careers. We have entries from students across Northern Ireland and the talent they display is wonderful as well as giving them the opportunity to network with some of the industry’s biggest names at the Awards Ceremony.”

Sponsored by Stellify Media, Westway Films and Performance Film and Media Insurance, the winners of these Awards go forward to the national RTS Student Media Awards which will be held in London later this year.

Tickets are limited, to register your interest please apply here.