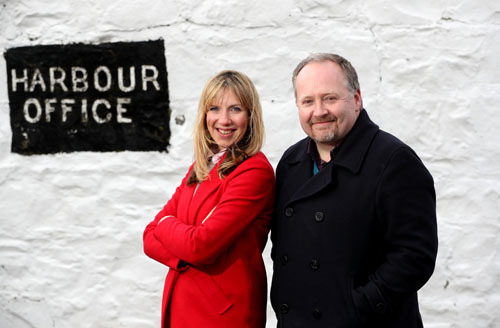 Hame, a brand-new series from Below the Radar productions, is set to showcase the people and places at the heart of Ulster-Scots communities across Ulster.

Beginning on Sunday 18 March, on BBC Two Northern Ireland at 10pm, Hame explores craft, music, heritage, history and faith, and features a number of small towns and villages such as Portavogie, Cullybackey, Articlave and Raphoe in Co Donegal.

The series, which was made with funding support from Northern Ireland Screen’s Ulster-Scots Broadcast Fund, is presented by Mark Thompson and Ruth Sanderson.

Well known in the wider Ulster-Scots community as both a musician and popular blogger, this is Mark’s first time as a presenter though he is no stranger to television as a contributor:

“I’ve appeared in a few programmes over the years, but never as a presenter, so it was a whole new experience for me. Some of the places I was a little familiar with, but to be welcomed into the ‘hames’ of other people was a unique privilege.”

Ruth Sanderson is already known to viewers as a reporter on BBC NI’s Home Ground and also on BBC Radio 4 where she is a regular presenter for On Your Farm. Born in a Presbyterian manse in rural Co Down, Ruth attended the University of St Andrews and has spent most of the last decade working in England for BBC Radio 4.

Ruth says: “The series has let me explore my own history and I’ve engaged with brilliant people who have very similar backgrounds to myself.  What struck me is how vibrant all the places we’ve visited are.”

For Mark Thompson the series title is the clue to what viewers will discover the six episodes:

It’s hard to explain but as an idea, ‘hame’ means so much more to an Ulster-Scot than ‘home’ ever will. It’s a deeper idea, it takes you back.  That’s why the word recurs so much in Ulster-Scots tradition, in songs, poems and stories. It’s a mood, a feeling, an emotion, it’s deep and special. I hope we’ve caught some of that notion in the series – through the folk from places that are special in their own quiet ways.

And Mark is especially pleased that the first episode in the series comes from Portavogie, on the Ards peninsula: “I get to invite you into my own ‘hame’ in the Ards – to wander along familiar shores among ‘big stanes’, to hear fishermen sing as they have been doing for generations, to see the most exquisite world class embroidery produced by their wives and daughters.”

In addition to Portavogie the other communities visited in the series are Raphoe, Co Donegal; Cullybackey, Co Antrim; Markethill, Co Armagh, the Foyle Valley in Co Tyrone; and Articlave in Co Londonderry.

For Series Producer, Sean McGuire, making the series was about finding new stories in many old and familiar place.

Sean says: “It was a privilege to be invited into families and communities right across Ulster – and to discover not just a wealth of fascinating history, but craft, music, and community spirit too. The great thing about working on a series like this one is how much you learn about the place you yourself call home.”