Gerry Kelly Uncovers Links To The Past: Pioneers Of Ulster Golf 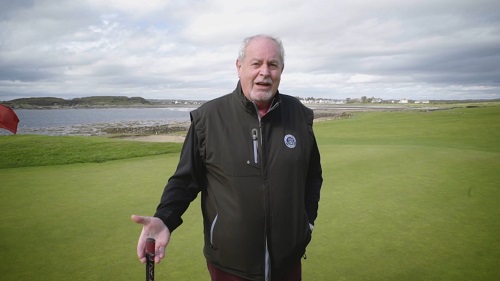 Lifelong golf fan Gerry Kelly explores the history of golf in Ulster, visiting clubs like Royal Belfast, Royal County Down and Royal Portrush as well as the town of St Andrews in Scotland, which is recognised internationally as the ‘home’ of the sport. Links To The Past: Pioneers Of Ulster Golf  is on BBC Two Northern Ireland, Sunday 23 June at 9pm.

Gerry begins his journey at his home club in Ardglass tracing the beginnings of golf in Ireland and reveals a few surprises as he discovers the relatively unknown Ulster-Scots golfing pioneers who helped establish the sport here.

He visits stately homes including Mount Stewart on the shores of Strangford Lough and down the road at Grey Abbey House, chatting with Lady Rose Lauritzen and William Montgomery, as well as private museums, plays the world’s most famous course, and also looks ahead to The Open at Royal Portrush. He also sets out to finally answer the age-old dispute about which club is actually the oldest in Ireland.

The history of golf here is intrinsically connected to Scotland. Gerry travels to St Andrews to explore how the Scots claim to have invented the sport and what part they played in bringing the game across the Irish Sea. He reveals the key roles played by statesmen, politicians and a forgotten Scottish schoolteacher who designed three of our most celebrated courses but has been all but forgotten.

Gerry Kelly, who has been playing golf for over five decades at Ardglass Golf Club, said: “Before I began filming for the programme despite playing the game for most of my life I actually knew very little about its history, and that’s a shame because there are few sports with as long and as rich a history. So myself and the camera crew set off to find out more of its history and the early beginnings here, and we uncovered some surprises along the way in our quest to find out which club is the oldest in Ireland.”