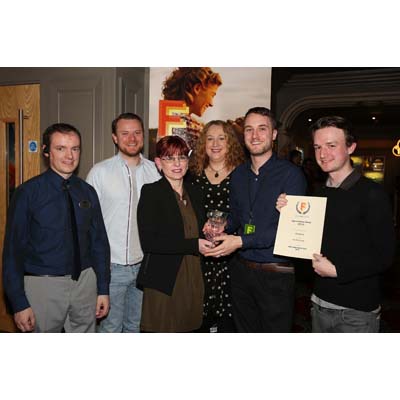 Foyle Film Festival, Northern Ireland’s only Oscar®-affiliated film festival, is now accepting submissions for the 30th edition of the festival, which will run 17 – 26 November 2017.

The prestigious Light In Motion (LIM) competition, sponsored by City of Derry Crystal, is open to filmmakers and animators across the world and will accept submissions up until Friday 29 September 2017.

The three competition categories under LIM 2017 are:

Recipients of the LIM Award qualify for consideration in the Short Film category of the Academy Awards® without needing the standard theatrical run. Foyle Film Festival is also an IMDb Qualifying Festival, granting all eligible film submissions a fast-tracked title page on IMDb.com.

Previous Foyle Film Festival winners and competitors who have proceeded to win the Oscar® include: Terry George for The Shore (2012), Martin McDonagh for Six Shooter (2006), Andrea Arnold for Wasp (2004), Adam Elliot for Harvie Krumpet (2003), and Eric Armstrong for Chubbchubbs (2002)

The success continued with 2017 BAFTA nominations for LIM Award finalists Standby directed by Charlotte Regan, and The Alan Dimension directed by Jac Clinch.

Funded by the Department for Communities through Northern Ireland Screen and by Derry City and Strabane District Council, Foyle Film Festival delivers a comprehensive programme of documentaries, short films and feature films from all over the world; a full programme of educational events for schools, youth, and adults and a variety of industry networking events and panel discussions.

Now in its 30th year, it continues to be a platform for filmmakers, animators and artists to screen their films, network with industry professionals and gain access to the international market.

The 2017 LIM Award Winners will be announced at the festival’s closing night gala screening in Brunswick Moviebowl on November 26.

For more information or to submit work please visit www.foylefilmfestival.org.