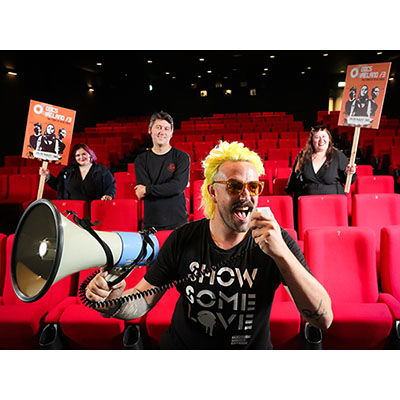 Policing, justice and political activism are just some of the highly topical themes of Docs Ireland, the international documentary film festival which returns to Belfast from Wednesday 25th – Sunday 29th August.

The third annual Docs Ireland festival will showcase some of the world’s most compelling new documentaries from countries including Ireland, UK, USA, India, Cuba, Palestine, Russia, Iraq and Hong Kong.

Ahead of the five-day festival, Docs Ireland will partner with Féile An Phobail to present a special screening of Fr Des – The Way He Saw It, a work in progress documentary about the life of highly respected West Belfast priest, the late Fr Des Wilson. Screening at the Odeon, Belfast on Thursday 12th August, the film looks at the pioneering work of Fr Des in the community, education and peace-making, and is narrated by Belfast born actor, Stephen Rea.

Fresh from securing rave international reviews at the Cannes Film Festival, Belfast-born filmmaker, and Chair of Docs Ireland, Mark Cousins, will present an exclusive sneak preview of his new film, The Story of Film: A New Generation, an epic and hopeful tale of cinematic innovation from around the globe.

With activism as a key theme of this year’s festival, Docs Ireland will screen new documentaries including Ken Fero’s Ultraviolence, which looks at the struggle by black families for justice for their loved ones who have died in police custody in the UK.

Solidarity, directed by Lucy Parker, delves into the lives of activists who have faced ‘blacklisting’ for expressing their right to protest.

Through its commitment to highlight new and emerging Irish talent, Docs Ireland will also showcase some of the most powerful and compelling new Irish documentaries. Untold Secrets, by acclaimed director Teresa Lavina, looks at the life and upbringing of the late Anne Silke, a young survivor of the Tuam Mother and Baby Home.

Other highlights of Docs Ireland include:

Stuart Sloan, Programmer of Docs Ireland said: “There is so much going on – and going wrong – with the world at the moment, that we need to stop, take a breath and gain some perspective, so that we can share ideas and hopefully start to change things for the better.

“Documentary is the perfect medium to inspire and generate discussion on real-life issues, including racism, homophobia, gender inequality, disability rights, economic injustice and the climate crisis and to be inspired by those taking action on them.

“We are really looking forward to getting back in front of a cinema screen, to the buzz of  the audience, and to sharing compelling stories from all over the world, with a unique selection of films that you just won’t see on Netflix.”

To find out more about this year’s programme and book your tickets for Docs Ireland, visit www.docsireland.ie.