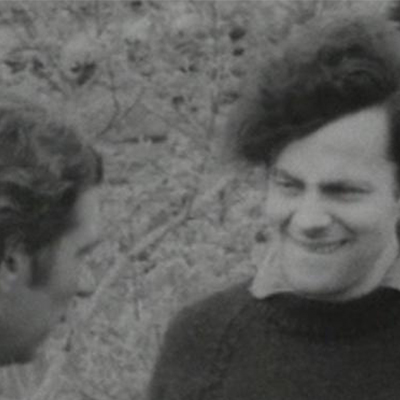 Join us for this FREE in conversation event with three of the finest pioneering broadcasters; Adrienne McGuill, Andy Crockart and Walter Love. On Saturday 6th of November at the Ulster Museum at 12pm. They will talk about their early careers in broadcasting with clips from the archive. Get your tickets here: What’s On – Belfast Film Festival.

All three of our guests in this session started their broadcasting careers in the 1950s and went on to make a major contribution to our television industry. Andy Crockart and Walter Love worked initially as studio managers in BBC Belfast while Adrienne McGuill was the first announcer on UTV’s opening night in 1959. She linked from the opening ceremony presented by Laurence Olivier into the first episode of “Robin Hood”. Over the next decade Adrienne co-presented the nightly magazine programme “Roundabout,” along with the children’s programmes, “For the Young ” and “Sean the Leprechaun ”. She went on to become best known as Miss Adrienne on the “Romper Room”.

While Adrienne was reading the local six o’clock news on UTV, Walter was presiding over BBC Northern Ireland’s news desk on “Six Ten” and “Scene Around Six”. Aged 11, he began his broadcasting career on Children’s Hour’s “I want to be an Actor” in 1946 and went on to be inducted into the Radio Awards Hall of Fame. His reaction to the honour was characteristically modest: “The letter informing me that I was to be inducted into the PPI Radio Awards Hall of Fame came out of the blue. I had to read it twice and check the envelope twice just to ensure it was, in fact, intended for me.”

Walter is still broadcasting and can be heard every Sunday evening presenting Radio Ulster’s “Jazz Club”.

Back in the 50s, one of Walter’s friends and colleagues at the BBC was Andy Crockart. Andy left the BBC to join the fledgling UTV and rapidly rose to become a producer. His productions covered the whole span of the station’s output: – religious discussions, “Romper Room”, “With a Fiddle and a Flute”, “Tommy’s Tavern”, “Teatime with Tommy” and numerous documentary series – including two on model railways- one for ITV and a second for Channel Four.