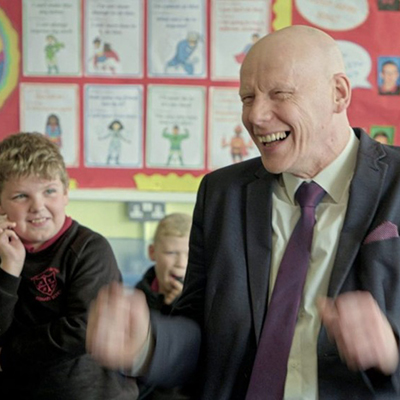 In Young Plato: The Philosophy Boys Of Ardoyne, the charismatic Elvis loving headmaster Kevin McArevey shows how critical thinking and pastoral care can empower and encourage the four to 11-year-old children. Along with his dedicated staff team, Kevin is determined to reverse the fortunes of an inner-city community impacted by urban decay, sectarian aggression, poverty and drugs.

Under Mr McArevey’s supervision, the boys at Holy Cross take inspiration from philosophers such as Plato, Socrates, Aristotle and Seneca. They engage in philosophical debates in the classroom, where each pupil is given a platform to express their thoughts and feelings on various subjects while also considering those of their classmates.

When conflict arises between pupils, philosophy is part of sorting it out between the boys involved – in front of a special ‘philosophy board’ in the school which allows them to reflect on the situation in a critical manner, analysing their emotions and the impact of their actions.

Mr McArevey also encourages his pupils to take what they’ve learned home with them, personally visiting with parents to help them understand how philosophical teachings and the power of simply communicating with each other can have a positive impact on families.

The school soon becomes a hot-house for questioning violence, as the determined headmaster sends the young boys home each day armed with the wisdom of the ancient Greek philosophers. We see how philosophy can encourage them to question the mythologies of war and of violence, sometimes challenging the narratives that they have grown up with and equipping them with new ways of negotiating with their peers.