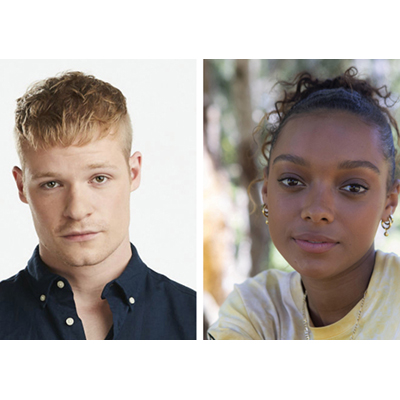 MASTERPIECE, ITV and Mammoth Screen (Victoria, Poldark) are partnering on a four-part television miniseries to reimagine The History of Tom Jones, A Foundling based on Henry Fielding’s classic novel. A picaresque story of the title character’s complicated journey to find real love, Tom Jones has delighted and scandalised readers since it was originally published in 1749.

Solly McLeod (The Rising) stars as the hero Tom, alongside Sophie Wilde (You Don’t Know Me) as the heroine Sophia Western.

Commented writer and executive producer Gwyneth Hughes: “Tom Jones is the mother of all romcoms and isn’t that just what we all need after the last couple of years of misery? It’s a story where the sun barely stops shining, where love conquers all, and at its warm heart stand a pair of young sweethearts everyone can root for. Henry Fielding’s 18th-century novel is sexy and fun; it’s also a dramatic rollercoaster, addressing so many modern concerns around consent, sexual equality and the pursuit of happiness. Tom and Sophia overcome enormous obstacles before finding their way home and to each other. This is a classic adaptation with a wise soul and a great big smile on its face.”

Commented Mammoth Screen: “With Gwyneth Hughes’s masterful scripts, Georgia Parris at the directing helm and rising stars Solly McLeod and Sophie Wilde leading the cast – we couldn’t be more excited to bring this joyous 18th-century story of identity and romance to the screen.”

Commented MASTERPIECE Executive Producer Susanne Simpson: “Tom Jones is one of the most joyful, big-hearted romances ever written. We’re delighted to add it to the long list of MASTERPIECE classic adaptations. Mammoth Screen is the ideal producer to bring together a brilliant writer, exceptional director and outstanding cast for this ambitious project.” MASTERPIECE is presented on PBS by WGBH Boston.

Commented director Georgia Parris: “This production of Tom Jones is an escapist romp into the sights, sounds and textures of 18th century England. It is an intimate story that shows how love and desire drive and confound us all, both women and men. I can’t wait to get started on telling this classic story, one of the first ever English novels, and making it resonate with a modern audience.”

With funding from Northern Ireland Screen, Tom Jones will film entirely on location in and around Belfast this autumn.

Richard Williams, Chief Executive of Northern Ireland Screen, said: “We’re delighted to be working alongside Mammoth Screen, MASTERPIECE and ITV on the latest drama to film in Northern Ireland. We are sure audiences around the world will enjoy this exciting adaptation of Henry Fielding’s classic novel.”

Tom Jones is a co-production of Mammoth Screen and MASTERPIECE.