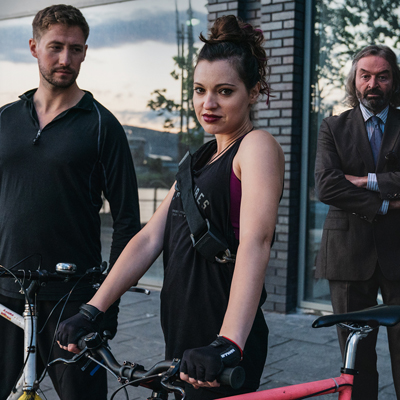 RTÉ and Northern Ireland Screen launch six brand new 20 minute dramas from Storyland 2019 on RTÉ Player. Currently in its ninth season, Storyland 2019 brings original stories to a national and a global audience, showcasing a great breadth of Ireland’s creative talent across writing, acting, producing and directing. This year three of the dramas are from Northern Ireland talent; A Deal’s A Deal, Eat the Rich and Mushrooms.

David Crean, Executive Producer for RTÉ Television said: “This year RTÉ and Northern Ireland Screen are bringing six original Irish dramas to audiences in Ireland and around the world. As well as introducing great new stories from new voices, Storyland is a significant part of RTE’s commitment to developing creative drama talent on the island of Ireland”.

Richard Williams, Chief Executive, Northern Ireland Screen said: “We are delighted to be working in partnership with RTÉ once again. In any medium a great story is central to success and Storyland allows us to develop, and invest in, a new generation of writing talent. Audiences at home and abroad are in for a real treat with these six new dramas.”

Previous Storyland commissions have gone on to be commissioned for RTÉ comedy and drama series, developed in a feature film and have won numerous international awards as well as  generating additional opportunities, both within and outside RTÉ for the writers, directors, producers and actors. In 2018 Cry Rosa, from Afro Mic Productions was nominated for an RTSNI award in the best drama category alongside Dave Allen At Peace and Come Home.

Warrior Films
Vinny and Lauryn fall for each other but their future together is thrown into doubt by the intersection of the darkest parts of their lives.
Written and directed by Dave Tynan (Dublin Oldschool) Produced by Dave Leahy and Michael Donnelly for Warrior Films. Starring Ian Lloyd Anderson and Eva Jane Gaffney.

Mushrooms
Richter Media and Write Path NI
A desperate housewife takes drastic measures to solve her problem. It’s only then that she discovers that she, herself, may be the problem that someone else has decided to solve.
Written by Marion McDowell, directed by Meghan McArdle, produced by Janine Cobain for Richter Media and Write Path NI. Starring Maggie Cronin, Andrea O Neil, Julie Alderdice, Ian Beattie

Yellow Bird
Stori Creative Ltd
Faced with the eviction from her home by her own daughter, an elderly mother takes in a refugee as freedom takes on a new relative meaning for the pair.
Written and directed by Grainne Dwyer. Produced by Fiona Dwyer for Stori Creative Ltd. Starring Catherine Field, Fachtna O Driscoll, Aoife Moore, Maurice Thom.