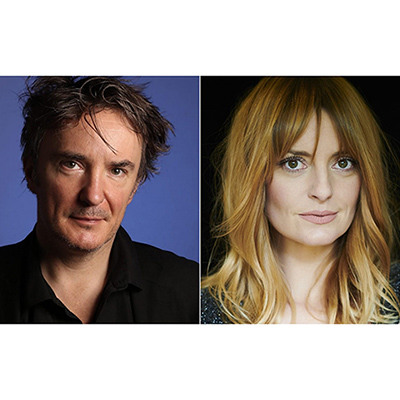 Made by Hat Trick Productions and filmed in Belfast with funding from Northern Ireland Screen, Stuck (5 x 15) is a sometimes dark, sometimes surreal sitcom about the relationship between Dan (Dylan Moran) and Carla (Morgana Robinson).

Dan and Carla are at a cross-roads. Dan has been recently made redundant, while Carla is wondering whether this is all she can expect from life. Add their age gap to the mix, and the re-emergence onto the scene of Carla’s ex-girlfriend Maya, and it’s no wonder that they’re feeling stuck.

Dylan Moran says: “I’m delighted to be working with the smartypants comedy wonks at Hat Trick, going to Belfast to shoot our crazy little series. Morgana is a one woman army of comic power, and the little gang of loons we found make a very lumpy talent piñata. Terrifying. I’m only ok with this because I know our brilliant director Ian FitzGibbon specialises in coaxing magic even from clumps like me who breathe through their foreheads and bang into the walls. Check us out.”

Jimmy Mulville, Executive Producer says: “I can’t think of a better way of beginning a new year than working on a Dylan Moran comedy. In Stuck he turns the traditional rom-com on its head with some hilarious and painfully honest observations. And with Morgana Robinson as his co-star it promises to be a masterclass in comic writing and performing.”

Seb Barwell, Commissioning Editor at the BBC says: “Dylan is one of the great comic minds of our time, so it’s hugely exciting that he’s created this new narrative series, tackling love, relationships and a very current sense of limbo, with all the finely-honed insight and humour of his stand up shows.”

Filming commences in January 2022 with further broadcast and casting details for Stuck set to be confirmed in due course.

Stuck (5 x 15’) is a Hat Trick Production for the BBC, written by Dylan Moran and commissioned by BBC Comedy. The Director is Ian FitzGibbon (Hullraisers, Raised By Wolves, Moone Boy), the Producer is Nick Coupe and the Executive Producer is Jimmy Mulville. The Commissioning Editors for BBC Comedy are Gregor Sharp and Seb Barwell and the Commissioning Editor for BBC Northern Ireland is Eddie Doyle.