Conversations with Friends begins on BBC Three on Sunday 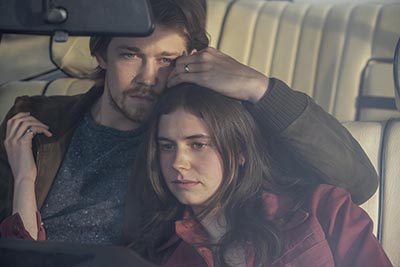 The highly anticipated TV adaptation of Sally Rooney’s debut novel, Conversations with Friends, begins this Sunday 15th May at 10pm on BBC Three and BBC iPlayer. Partly filmed on location in Northern Ireland with funding from Northern Ireland Screen, the series was directed by Lenny Abrahamson and Leanne Welham and produced by Element Pictures (Normal People, Room, The Favourite).

Frances (Alison Oliver) is observant, cerebral and sharp. Her ex-girlfriend, now best friend, Bobbi (Sasha Lane) is self-assured, outspoken and compelling. Though they broke up three years ago, Frances and Bobbi are virtually inseparable and perform spoken word poetry together in Dublin. It’s at one of their shows that they meet Melissa (Jemima Kirke), an older writer, who is fascinated by the pair.

Bobbi and Frances start to spend time with Melissa and her husband, Nick (Joe Alwyn), a handsome but reserved actor. While Melissa and Bobbi flirt with each other openly, Nick and Frances embark on an intense, secret affair that is surprising to them both. Soon the affair begins to test the bond between Frances and Bobbi, forcing Frances to reconsider her sense of self, and the friendship she holds so dear.