BBC Three gets ready to party with Alleycats 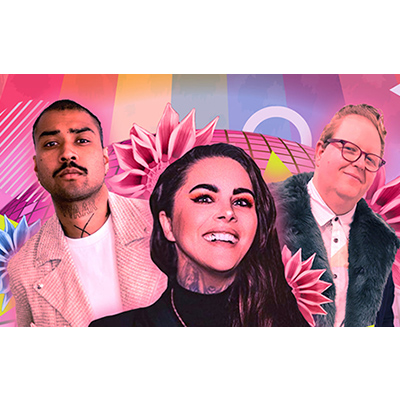 From inspiration to celebration, each episode sees the party agents tasked with creating an extravagant event for a ‘party star’ with something important to commemorate.

The agents are given a brief and then have to pitch their idea before one is chosen, with the party star’s best friends on hand throughout to help pull off a memorable night.

The party agents are accomplished professionals and include cultural producer and event curator Ryan Lanji, model and businesswoman Teddy Edwardes and party architect, Christopher Mills. Each of them will bring their own expertise and unique creative vision to the events, as they work together to make a bash to remember for the party star and their friends.

Ryan is an active public figure in the LGBTQ+ community and his beliefs of raising awareness and visibility by creating culture, championing creativity, and causing opportunity led him to create a Queer Bollywood Hip/Hop night which has received global attention that champions Queer/Creative South Asians.  Christopher has been planning luxury parties for over a decade and is the founder of his own studio. Creative and flamboyant with a custom wardrobe, Christopher takes pride in making perfect events and has organised lavish parties for the rich and famous. Teddy is a huge advocate for queer women and runs an event solely for women and non-binary people in order to create a safe and relevant space for Gay, Bi, Queer and Trans women. In three years, it has grown from a monthly club night to being housed in a fully-fledged London venue selling out 2000 tickets in advance every month.

Des Henderson, Alleycats, says: “At Alleycats we’re all about celebrating individuality and we’re thrilled to be bringing fabulous queer parties to life on BBC Three.”

Fiona Campbell, Controller BBC Three, says: “We first heard about this idea through our partnership with BBC Northern Ireland and Northern Ireland Screen and loved it so much we had to bring it to series straightaway. After a year with no parties, The Big Proud Party Agency is here to bring the BBC Three audience some much needed joy.”

Eddie Doyle, Head of Commissioning at BBC Northern Ireland said, “We know how to throw a party in Northern Ireland – and it’s the perfect time to commission this exciting new series from Alleycats. We’re delighted to be working with Northern Ireland Screen and BBC Three to support the local independent sector, and it’s fantastic to see innovative new formats like this moving to full commission.”

Richard Williams, Chief Executive, Northern Ireland Screen, said: “When we launched the Youth Content Development scheme in conjunction with BBC Northern Ireland and BBC Three, we were confident it had the potential to unlock a lot of opportunities for our vibrant indie sector. Alleycats’ Big Proud Party Agency being commissioned to go straight series proves that this model works, and we look forward to sharing details of the winning commission soon too.”

The BBC Three and BBC Northern Ireland partnership with Northern Ireland Screen invited local companies to submit format ideas with the promise of a Factual Entertainment series commission for the network channel. The winning commission from the first round of the initiative will be announced soon.

It was commissioned by Fiona Campbell, Controller BBC Three and the Commissioning Editor for the BBC is Clare Mottershead, Popular Factual and Factual Entertainment. The Executive Producers for Alleycats are Des Henderson and Ed Stobart.