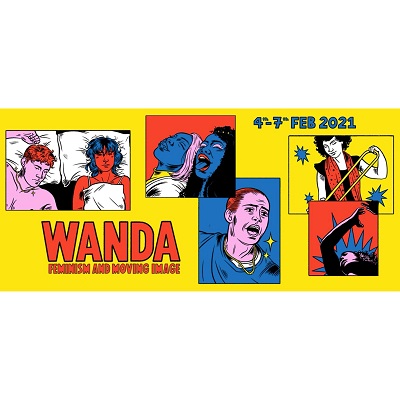 This year the festival opens with a conversation with Ita O’Brien, pioneer intimacy coordinator on productions, such as Normal People, I May Destroy You, Industry and It’s A Sin. She is revolutionising the way intimate scenes are created by actors and filmmakers on set by ensuring conditions conducive to informed consent.

There is a focus on Dance on Film. As the pandemic has closed theatres and other performance spaces, choreographers and dancers are turning to the camera as a way to make work and reach audiences. Looking at practitioners today with a panel discussion and a programme of recent work, including some made during lockdown, but also expanding this to reflect the long and rich history of dance on screen and its feminist connections with a Maya Deren Double Bill and a screening of Yvonne Rainer’s Kristina Talking Pictures. As well as this there are films from two award-winning filmmakers working today who use dance within their work, Onyeka Igwe and Mairéad McClean.

WANDA is also delighted to be screening two fantastic documentaries in the programme. Arena: Putting Ourselves in the Picture is a fascinating 1987 film about the English artist Jo Spence, and Purple Sea is a poetic but hard-hitting work from 2019 shot on a waterproof wrist camera when the filmmaker was stranded in the sea with fellow passengers of a capsized boat as they made their way from Syria to Europe.

Turning the conversation to the industry there will be a discussion around job sharing in film and television between Raising Films and Northern Ireland Screen.

WANDA’s Laura and Rose were also privileged to work with a group of young people (16-25) from Reimagine, Remake, Replay in 2020 where they worked towards a film screening event. The group have programmed a screening of Andrea Arnold’s Fish Tank, which is hosted in collaboration with Curzon Home Cinema. The group are organising a watch party and a collection of writing an illustrations to accompany the event.

The closing film is the Northern Irish premiere of Lingua Franca, a critically acclaimed film about immigration, identity and class struggles in Trump’s America. To finish the festival, Dublin-based musician FEARS is bringing a Zoom Dance Party to raise money for Women’s Aid.