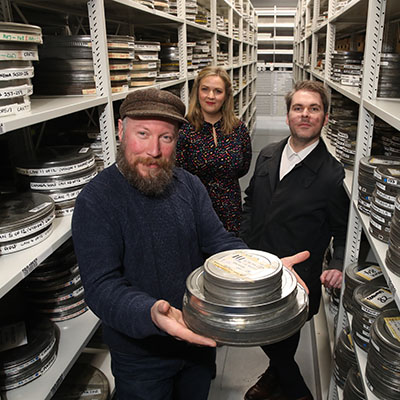 A unique record of archive film has been beautifully preserved for future generations and will now be showcased by an eclectic selection of artists in a series of projects collectively titled The Looking Glass Anthology.

This partnership project between Northern Ireland Screen’s Digital Film Archive and the Public Record Office of Northern Ireland (PRONI) is funded by the Broadcasting Authority of Ireland as part of an archiving scheme to preserve a record of Irish culture, heritage, and experiences.

The project invited artists to develop creative responses to 160 hours of UTV cine film, captured during its first decade of broadcasting from 1959 to 1969.

A selection of artists responded, and the four chosen projects are:

A website entitled DFA Slow TV has also been created to act as a 24-hour live stream of the digitised material. Themes include local traditions, folklore, crafts, and fashion.

Contribution funding from the Department of Communities supports the project and a programme of public engagement.

“We have an array of amazing artists here that through this project have been given a platform to share their art and use it to bring this beautiful archive footage back to life in a number of new and imaginative ways.

“We were delighted to partner with the Public Record Office of Northern Ireland on this project, and thank the Broadcasting Authority of Ireland and the Department of Communities for funding this activity.”