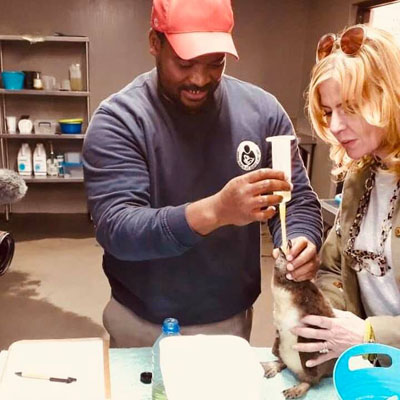 Leading independent production company, Waddell Media has been commissioned to produce a new twenty part series for Channel 4 to air in Spring 2020 with the working title Work on the Wild Side.

The series, which is received funding from Northern Ireland Screen, follows vets, veterinary nurses and long term volunteers of all ages who have given up their day jobs in the UK and moved to South Africa to rescue, care and help save the lives of some of the extraordinary animals that live there.

Jannine Waddell, MBE, MD of Waddell Media and Executive Producer of Work on the Wild Side says: “The idea behind this series came to me while I was filming in South Africa just over a year ago. There seemed to be no end of international experts and volunteers of all ages, particularly Brits, who had made the lifestyle choice to pack up their lives and move there to help and protect these endangered animals. I am absolutely delighted that Channel 4 shares my enthusiam to bring these wonderful stories to life and for the support from Northern Ireland Screen to make it happen.

“Each hour-long programme will focus on the lives of our animal heroes in an observational way. There will be lots of amazing animal stories, rehabilitation, visits to the vets, baby feeding frenzies, relocations by road, plane and helicopter, dehorning, new births and animal releases as well as visually capturing the colour and vibrancy of South Africa.”

David Sayer, Commissioner, Channel 4 says: ”The series promises to offer some fascinating insights into the working lives of the professionals and long-term volunteers involved in helping and protecting some of the world’s most endangered species.  We’re delighted to shine a spotlight on that world.”

Richard Williams,CEO, Northern Ireland Screen, says: “We’re very pleased to support Waddell Media in the production of this chunky, story rich commission for Channel 4.  Long form potentially returnable series are the key to sustaining and growing the independent sector in Northern Ireland and we’re delighted that C4 has given Waddell Media a commission that fits that bill.”

Lee Salisbury, series producer for Waddell Media says: “This series will be a real escape for people sitting at home watching. With four production units working across dozens of different locations across South Africa, we’ll witness a wide variety of animal stories, from penguins and sharks in the south to the ‘big five’ in the northern plains.”

Other new commissions for Waddell Media include its holiday series Getaways which returns for a 12th season, this time as a joint venture between BBC Northern Ireland and new partners BBC Scotland. The holiday review show will feature six exciting destinations that can be explored via direct flights from Scotland and Ireland.

A new four part A Year on the Lakes follows the successful formula of last year’s ratings success The Chronicles of Mourne on BBC Northern Ireland and BBC 2 network with filming taking place in the lakelands of Fermanagh, following a range of people who live and work there across four changing seasons. Waddell Media is also making a three part observational documentary series for BBC Northern Ireland set in the three campuses of Northern Ireland’s world class Agricultural College CAFRE.

Based in Holywood, Co Down, Waddell Media is a leading producer of factual, lifestyle and entertainment programming for the UK, Irish and international markets.