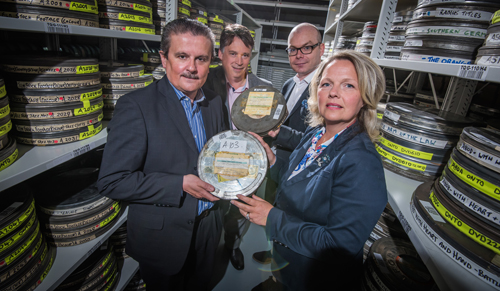 A new partnership agreement between the Public Record Office of Northern Ireland (PRONI), Northern Ireland Screen’s Digital Film Archive and ITV aims to safeguard the extensive catalogue of UTV archive material, dating back over the past 59 years.

The partnership, funded by the Department for Communities through PRONI, will preserve UTV’s culturally rich archive through an ongoing digitisation process, which will help protect the screen heritage of UTV’s archive for future generations to come.

Michael Willis, Director at PRONI said: “The UTV archive is one the most significant additions to PRONI’s collections in many years, encapsulating as it does the history of Northern Ireland during the latter part of the twentieth century.  Preserving the archive is paramount to protect our rich and diverse culture and to enable future generations to see how events large and small have helped shape who we are today.

“I am delighted that we have been able to work in partnership with Northern Ireland Screen and look forward to seeing UTV archive footage becoming available through the Digital Film Archive.”

The public will have access to the wealth of material, with digitised content to be made available via Northern Ireland Screen’s Digital Film Archive. Dedicated outreach activities will also allow members of the Northern Ireland public to enjoy the cultural and educational value of the content.

UTV first went on air in 1959, becoming the first commercial television broadcaster on the island of Ireland. UTV’s output over the years has featured a diverse range of genres including contributions in the areas of entertainment, factual, children’s television, as well as an unwavering commitment to local news and current affairs.

Richard Williams, Chief Executive, Northern Ireland Screen said: “This is a fantastic opportunity to work in partnership with PRONI to ensure the UTV archive collection is retained in Northern Ireland. We are delighted that, as part of this collaboration, the public will have access to Northern Ireland’s moving image heritage in a way that is stimulating, entertaining and sustainable.

“PRONI’s involvement with this project will ensure the preservation of significant material from UTV’s archive, reflecting various key moments in Northern Ireland’s history. Of course, not only does this include the momentous political junctures of our past, but also the light-hearted entertainment programmes, which brought so much joy to the people of Northern Ireland.”

Terry Brennan, Head of News and Programmes at UTV said, “The importance of this rich archive cannot be underestimated. This partnership is the culmination of many months of hard work, with all partners dedicated to ensuring that the UTV archive is protected and preserved for many years to come.”