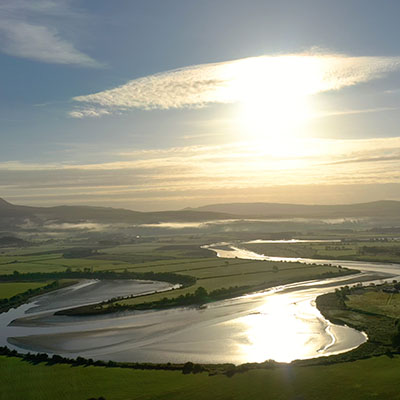 A new Ulster-Scots Broadcast Fund documentary, Nature’s Haven, airs on NVTV on Christmas Day at 5pm. Produced by Northern Visions, this is the first in a series of films being planned which brings together people living around Lough Neagh together with people in Galloway to explore environmental issues in common.

With stunning cinematography from Matt Gould, the documentary weaves its way along the river valleys of Counties Antrim and Tyrone across to the Galloway hills, forests and bog lands, braiding personal stories of caring for the environment seamlessly with science and history.

Simon Wood of Northern Visions explained: “Here were two landscapes, the largest lake in the UK and the largest forest, connected by the history of migration, back and forth, over the centuries. We were interested to explore what, and indeed if, there was much in common today”.

There are fascinating insights where conservation, history and science meet as when Mark Horton holds in his hand a pearl mussel which was a baby when the Titanic left Belfast or when Mairi Telford Jammeh explains their community has bought a well-known haunt of the Border Reivers. “In those days, it was a big bog…. and indeed, we probably will turn it back into a big bog, with the ambition being to get it National Nature Reserve status.”

The use of language and vocabulary which survives from former times provides valuable descriptive knowledge for today’s ecologists.

“Over the years I have realised there is a rich language around peat bogs recorded on our Ordnance Survey maps”, explains peat land specialist Emily Taylor, “I think the language shows we used to really value these areas in how we lived. We can go out and target our surveys, hone in on the names that these places were given. Using language, using the way we recorded language, is actually really helpful now.”

Nature’s Haven will also be available to view online at www.nvtv.co.uk.

NVTV broadcasts on Freeview 7 across Greater Belfast and Virgin Media 159 across Northern Ireland.