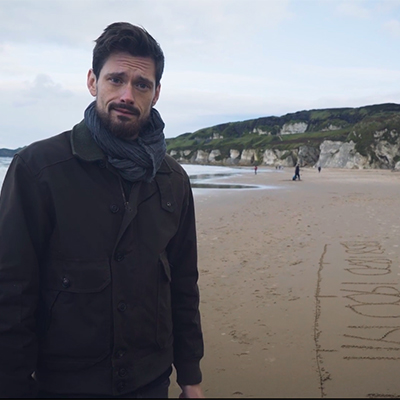 Writer and adventurer Leon McCarron traces the life of his relative, Andrew Bonar Law, the shortest-serving British Prime Minister of the Twentieth Century and one of the most influential figures in Ulster resistance to Home Rule and the creation of Northern Ireland, in The Unknown Prime Minister and Me. Produced by NPE Media with support from Northern Ireland Screen’s Ulster-Scots Broadcast Fund, the documentary airs on Wednesday 9th June at 10:45pm on BBC One Northern Ireland.

Law’s family were Ulster-Scots who had lived in North Antrim for hundreds of years, but he was born in New Brunswick, Canada as his father was a church minister there for a couple of decades before he returned to Portrush in later life. Leon investigates how these strong family ties to Ulster contributed to Law’s uncharacteristically passionate defence of the Union during the tumultuous early decades of the Twentieth Century.

Leon also discovers the personal heartache that marred Law’s life, from the early deaths of his mother and his wife to the tragic loss of two of his sons in the First World War.

Beginning with his final resting place in Westminster Abbey after a state funeral held against his wishes, the film reveals the complexities of Law’s character and how he became an unlikely key ally of the Ulster Unionists at Westminster, as well as a visionary and hard-working statesman regarded by some as the ‘father of the modern Conservative Party’.

The documentary reveals how Bonar Law’s more inflammatory speeches during the Home Rule crisis caused unease within his family and Leon goes in search of a piece of family memorabilia connected with this story.

Leon McCarron said: “This film gave me a chance to investigate my own family history in a way that I’d always wanted to, but it was also to look more deeply at the complex history of my own country from a new perspective. I hope that viewers will enjoy exploring the life of Bonar Law as much as I did and that, also like me, they’ll learn a lot about Northern Ireland along the way.”

Contributors to the documentary include historians in Northern Ireland, England and Dublin, Baroness Sayeeda Warsi, and members of the Law family. It was shot in London, Belfast and outside Portrush and Coleraine in County Antrim and features archive from his short-lived tenure as Prime Minister in the 1920s.