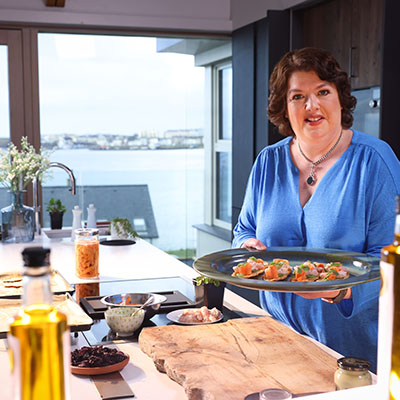 In Paula McIntyre’s Hamely Kitchen, a new Ulster-Scots Broadcast Fund three-part series, Paula shares a mouth-watering selection of recipes, which she hopes viewers will serve up to their own family and friends. The series was made by Clean Slate Productions and begins on Monday 6th September at 7:35pm on BBC One Northern Ireland.

For Aghadowey-born chef and food writer Paula McIntyre a Hamely Kitchen means somewhere where there’s food cooked with soul and where she spoils friends and family with all the incredible, fresh, local ingredients Northern Ireland has to offer.

The Atlantic Ocean is on Paula’s doorstep. On clear days she can see the Isles of Mull and Jura, a reminder of her own Ulster-Scots roots, and the early Scottish settlers who brought ingredients and recipes to these shores, and who remain a major influence on her own approach to cooking.

There is nothing Paula loves more than looking to the past for inspiration while creating dishes which are right up to date.

Across the series Paula will occasionally leave the kitchen to meet with local suppliers; she will go fishing for ling near the Skerries with fisherman Richard Connor; she will meet a member of a co-operative brewery making real ales; as well as a young farming couple  from Bushmills who are raising heritage breeds of pigs using traditional farming methods, and a friend who is passionate about bee keeping.

Paula McIntyre says: “We have such wonderful produce in this part of the world and I’m delighted to be able to show it off in this TV series. To be able to film it on my own doorstep has been an absolute joy.”

In episode one, Paula makes a Glens of Antrim lamb roast with a caramel and vinegar glaze and she will be elevating the humble turnip by making two side dishes; turnip cake and turnip gratin. This will be followed by Salt Ling (a sustainable fish) roasted and served with boxty, poached leeks, bacon crumb and an elderberry caper butter sauce. The final dish is a Brined braised Denver cut of beef with a nettle and onion crust served on a barley risotto.

In episode two, Paula is BBQing on the terrace – with locally-caught langoustines on a potato and smoked dulse wafer with pickled carrot. Then she will be making what she describes as ‘love on a plate’ – a country pie made with locally bred ham served up with Crowdie cheese and pickled smoked beetroot salad. She will round off episode two with her jazzed up version of a tray bake – a rhubarb and blackcurrant ‘traybake’ with cider custard poured over.

In episode three, Paula forages for wild garlic which she will incorporate into a soup of roasted onion and wild garlic bud, served up with savoury cheese and smoked tomato jam biscuits. Paula is a keen sea swimmer and will be serving up this soup to her fellow swimmers on East Strand, Portrush. She will also be making the beautifully descriptive dish Mollygowans and Clappydoos (Ulster-Scots), which is an escalope of monkfish and shellfish cooked in cider dressed in brown butter. Finally Paula will finish up the series with a nostalgic trip back to childhood (with an adult twist) by cooking a baked homemade hazelnut liqueur custard, honeycomb crumble wafers, apples and blackberries.