Out of Tune Games launch its first ever game: Crooks Like Us 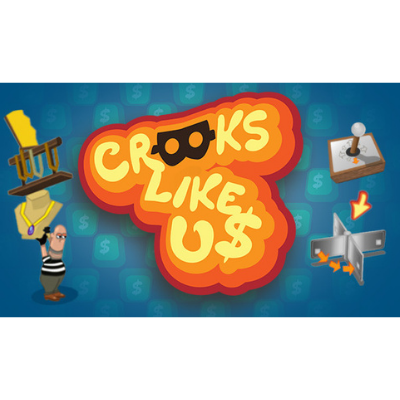 Out of Tune Games first ever game, Crooks Like Us, will be available for early access on PC and Mac via Steam on Wednesday 17th March.

Crooks Like Us is a chaotic online multiplayer game, where players get to steal everything they see! Players must carry as many items as they can to their getaway van before time runs out – a higher stack results in more points. Players can fight their way to first1st place by using gadgets like anvils, ice, earthquakes to mess with other players!

There will be a stream-a-thon event of Crooks Like Us from 12noon on launch day for 24-hours, consisting of 24 different Twitch streamers from around the world playing the game on their channel. Details can be found HERE.

Streamers an also connect their Twitch account to enable an interactive chat feature. This gives viewers he ability to type commands into the chat while the streamer is playing to launch some of the crazy gadgets at them in real time.

Out of Tune Games’ Mal Duffin said: “We’ve been actively testing the game via Betas and demos all through development and we are so happy to unleash the game on the public via Early Access. The Twitch functions make it even more fun and we’ve watched plenty of streams where viewers seem to be having as much of a laugh as the streamers themselves.”

Matt McCrum of Out of Tune Games added: “We really wanted to create a game that gave you lots of options, so you can be the field of play and make lots of cash or jump into the van and mastermind your menace from there. Either way, you’ll have a lot of fun.”

Out of Tune Games was supported by The Pixel Mill’s accelerator programme, Platform, in the creation of the game. The programme provides gaming companies with access to the The Pixel Mill’s facilities, mentors, training, and funding as well as the opportunity to attend markets to build their business network and meet consumers.