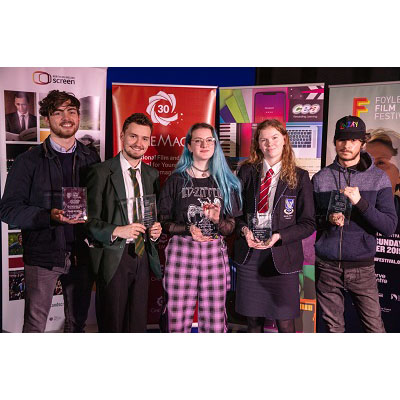 It was lights, camera and action for Northern Ireland’s most creative young film makers and animators at CCEA’s Moving Image Arts Showcase 2019.

The annual two day event, supported by Northern Ireland Screen, Foyle Film Festival, City of Derry Crystal and Cinemagic Film and Television Festival, brought together GCSE, AS and A Level students to see their work on the big screen. The films and animations on show brought to life an array of genres for the audience, ranging from ‘on the edge of your seat’ thrillers to ‘laugh out loud’ comedies.

Hosted at Brunswick Moviebowl, Derry and Odyssey Cinemas, Belfast students in attendance benefited from meeting established industry professionals and attending a Careers Fair after the ceremony.

Special guests included BAFTA award winners and EMMY award nominees, Sixteen South, one of the UK and Ireland’s largest, busiest and most successful creators and producers of television for children.

At the Belfast event, CCEA’s Director of Education, Margaret Farragher said: “On behalf of everyone at CCEA I wish to congratulate every student who was shortlisted for the Moving Image Arts Showcase this year. The exceptionally high standard displayed today is testament to your imagination, skills and hard work.

“Moving Image Arts equips students with a range of key skills for many future career paths. It is a privilege for us at CCEA to know we are playing a small role in supporting the future careers of students in the audience today.”

“I’m so pleased to be here at the Moving Image Arts Showcase today! Animators, designers, editors and creatives relocate to Belfast from all over the world to work with us on our shows.  We love the fact that Moving Image is being taught in so many schools now at GCSE and A level because our industry needs lots more talented creatives and the standard of work we’ve seen today is so high, that it gives us a huge amount of excitement for future of the creative industries here in Northern Ireland!”

“On behalf of Northern Ireland Screen, I would like to congratulate all of the students who have had their work screened at this years’ Moving Image Arts Showcase. The high standard of creativity on show has demonstrated yet again the breadth and depth of talent taking part in this exciting qualification.

“Northern Ireland Screen’s education work focuses on developing creative skills for young people and cultivating the local talent to help keep Northern Ireland as a prominent base for film making and animation. Events such as the Moving Image Arts Showcase is a stepping stone for many of these young people wanting to develop careers in this fast growing and dynamic industry.”

Commenting on support for the Moving Image Arts Showcase, CCEA’s Subject Officer Ingrid Arthurs said: “The Moving Image Arts Showcase would not be possible without the continued support of our industry partners – Northern Ireland Screen, Foyle Film Festival, City of Derry Crystal, Cinemagic, Brunswick Moviebowl and Odyssey Cinemas.  Their support makes it possible to celebrate the work produced from this unique qualification and shine a spotlight on the creative skills that sits within our schools. We are also so pleased that many film professionals took the time out of their busy schedules to recognise the work of Moving Image Arts students. Congratulations to all.”

Each shortlisted film was selected by a panel of experts, including representatives from Northern Ireland Screen, Foyle Film Festival, Cinemagic and CCEA. It is sponsored by City of Derry Crystal.

The winning films were chosen for their strong production values, story, originality and audience appeal.