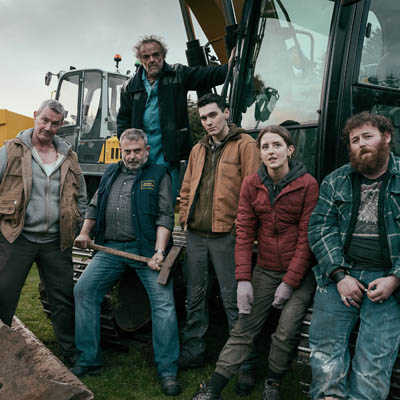 Shudder, AMC Networks’ premium streaming service for horror, thriller and the supernatural, today announced that it has acquired all rights in North America to Chris Baugh’s (Bad Day for the Cut) wild and wicked horror comedy BOYS FROM COUNTY HELL, starring Jack Rowan (Peaky Blinders), Nigel O’Neill (The Bookshop) Louisa Harland (Derry Girls), Fra Free (Animals) and John Lynch (The Terror). Shot on location in Northern Ireland, the film, which was selected for this year’s cancelled Tribeca Film Festival, had its world premiere last week at Sitges International Film Festival and will premiere on Shudder in the US and Canada next year.

Welcome to Six Mile Hill, a sleepy town whose only claim to fame is that locals say Bram Stoker once spent a night in the local pub. It’s home to Eugene Moffat, who spends his days drinking pints with his friends and pranking tourists at the grave site of Abhartach — a legendary Irish vampire who may have inspired Stoker’s infamous Dracula. Sinister events unfold when Eugene and his father’s construction crew knock over Abhartach’s supposed resting place. When an infected workmate attacks them one night, the fight for survival begins. But stakes and garlic won’t defeat this primeval force. Eugene and the Boys must rally their wits to save the town and send this bloodthirsty monster back to hell.

“I’m delighted that BOYS FROM COUNTY HELL has found a North American home on Shudder. The film was made with a lot of passion and grit by many talented people, and so it’s a huge honour to have it presented by such a fearless curator of boundary-pushing genre programming,” said director Chris Baugh.

“BOYS FROM COUNTY HELL is a pure delight from beginning to end that manages to be both funny and scary, with characters you’d be happy to grab a pint with at the pub even if they weren’t fighting vampires. We know Shudder members are going to love it as much as we do, and we can’t wait to share it with them,” said Shudder General Manager Craig Engler.

“We are thrilled to be teaming with Shudder for the North American release of BOYS FROM COUNTY HELL. We look forward to audiences enjoying the film on what is, for us, the premiere streaming service dedicated to entertaining genre fans the world over,” said producer Brendan Mullin.

BOYS FROM COUNTY HELL is produced by Brendan Mullin of Six Mile Hill Productions and Yvonne Donohoe for Blinder Films, and executive produced by Katie Holly for Blinder Films, Brian Kavanaugh-Jones and Rian Cahill for Automatik, and Lesley McKimm for Screen Ireland. The film is a co-production between the Republic of Ireland and Northern Ireland and was supported by Endeavor Content, Screen Ireland, Northern Ireland Screen, and Egg Post Production.

The deal was negotiated by Endeavor Content on behalf of the filmmakers and Emily Gotto on behalf of Shudder. Baugh and Mullin are repped by Independent Talent Group, Grandview, and CAA.