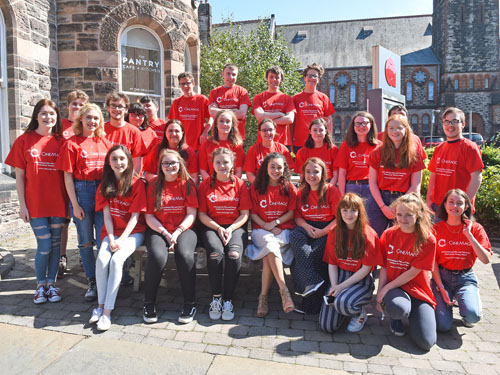 Cinemagic, supported by Film Hub NI, part of the British Film Institute’s Film Audience Network, is looking for 15-25 year olds to participate in a new initiative where participants will work with the Cinemagic Festival team in partnership with film exhibition partners including Queen’s Film Theatre and Foyle Film Festival and Nerve Centre to develop young people’s skills in programming films and celebrating cultural and specialised cinema.

The group of young programmers will work with past Cinemagic young consultants and Cinemagic Festival jury members and spend three days this month (18th, 20th, 21st) participating in workshops and discussion and watching and reviewing films from around the world.

Chris Shaw, Cinemagic Festival Programmer said “This is a fantastic opportunity with support from Film Hub NI, to work alongside like-minded people to learn about film programming and selecting films. The participants will enjoy a multi-faceted practical experience, immersing themselves in all aspects of film programming and learning about the specifics and business of this area of the film industry. Topics examined will include accessing film content, negotiating titles, working within budgets, print transport, programming themes and strands and how programming links with marketing, sales, promotion and audience development.”

We are looking forward to working with a group of enthusiastic, creative young people and the aim is to nurture young talent and engage with partners to build a network of young programmers across NI, developing skills and awareness in this area.”

Hugh Odling-Smee, Project Manager of Film Hub NI commented “Young audiences are at the heart of the BFI’s Film Audience Network plans for the next four years, and what better way to engage with young audiences than empower them to screen films themselves. We are delighted that our members, Cinemagic, QFT and Foyle Film Festival and Nerve Centre are combining to offer young people their considerable expertise in programming and exhibition. We look forward to working with all three organisations to develop this programme further in the coming years.”

The Young Programmers at Cinemagic will meet on Monday 18th, Wednesday 20th and Thursday 21st February in Belfast from 10.30am-3.30pm and must be available for each day of the project. To register interest in participating please email [email protected] to request a registration form.

Participants will also be offered the opportunity to input to the planning and programming at QFT, Foyle Film Festival and Nerve Centre and the 30th Cinemagic Festival in Belfast which takes place in October 2019, at which the young people’s achievements will be showcased and celebrated.