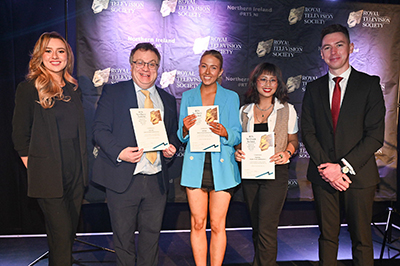 Queens University Belfast picked up the Drama Award for Roots by Claire Mulligan, Elen Nahapetyan, Jasmin Walls, Bethany Colvin and Rachel Madden. Roots is a film about identity, telling the story of an insecure black student who tries to straighten her natural afro hair to fit in with a predominately white Belfast community.

The Factual Award was also won by Queens University Belfast students Samuel Robinson, Ryan Elliman and Toby James for Defining Street Food, which highlighted the highs and lows of providing top-quality street food in the hidden corners of the North Coast of Ireland. A special Highly Commended Award was also to Made in the Emerald Isle by Queens University Belfast students Caitlin Hurley, Ellery Wooff, Cian Flanagan and Kerah Reyes.

And the Craft Award for excellence in camera work was awarded to the University of Ulster’s Magee students Oisin Lavery and Peter Johnston for Kokoro, the story of a young woman who finds herself on the run from a menacing masked man.

Fiona Campbell, Chair of RTS NI said: “The RTS is first and foremost an educational charity so these awards give us the opportunity to celebrate the wealth of young talent emerging from our colleges. The judges were hugely impressed by the creativity and imagination shown in this year’s entries. We wish all our winners every success in the national RTS Student Television Awards taking place in London this June.”

Bernard McCloskey, Head of Education, Northern Ireland Screen said “Congratulations to everyone who has taken part in this year’s Awards. Winning an RTS NI Student Award gives these students a prestigious accolade to help them with their future careers.”

Stewart Robson, Journalist at UTV commented: “I’ve really enjoyed hosting this event and showcasing the talent and hard work of all the students shortlisted tonight. Television production is an amazing career whether you’re behind or in front of the camera, and I wish all the students every success for the future.”

The winners of these awards go forward to the national RTS Student Media Awards on 24th June in London.