The Rocky Road to Equal Marriage: How Did We Get Here? 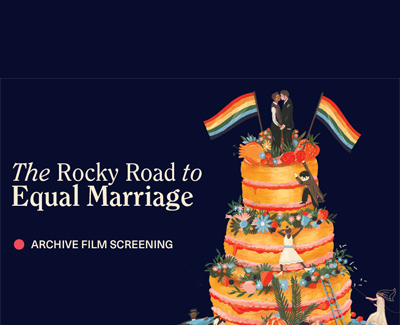 The legalisation of same sex marriage in Northern Ireland was an occasion so momentous and so long in the making, that it demands reflection. How did we get here?

This is a difficult question to answer for LGBTQ+ community, for whom life has been lived either on the periphery or under the radar.

This curated film drawn from archival film footage that will address and highlight these gaps by tracing the roots and journey of the equal marriage campaign. Alongside other entertaining stories from the last sixty years of queer Northern Irish history. It screens on Thursday 27th February at 7pm in QFT.

The film is produced with material from film archives including Northern Ireland Screen, BBC NI, RTE, and NVTV.

The screening will be followed by a panel of invited guests to discuss the campaign and what it means to be granted equal marriage rights, but not necessarily by your own people. To secure tickets for this screening please click here.

This is a production by LUMI at QFT with funding from Film Hub NI, part of the BFI Film Audience Network.

LUMI is QFT’s new brand created to deliver more relevant events for people aged under 30, focusing on what it’s like being young in today’s world.