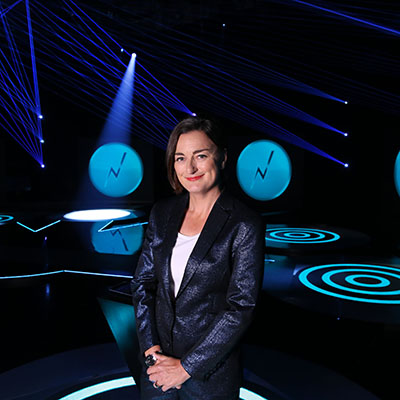 Lightning, the brand-new game show from Belfast-based Nice One Productions, airs on BBC Two weekdays at 6.30pm from Monday 25th January. Comedian Zoe Lyons presents the electrifyingly fast quiz with a £3,000 jackpot. The series was made in Northern Ireland with funding from Northern Ireland Screen.

Lightning features six plucky contestants as they compete across six rounds testing their general knowledge, quick thinking and speedy reactions whilst a ruthless spotlight patrols the studio. The contestants’ motivation in each round is simple: stay out of the light and you’ll be alright!

In each nerve-shredding round, contestants aim to pass the dreaded light from themselves onto a rival of their choice by correctly answering a question or completing a physical task – but only viewers at home can see the ticking clock, and whoever gets caught in the light when the time runs out at the end of the round is struck by lightning and eliminated from the game.

The contestant who manages to make the endgame in a show plays for the chance to win up to £3,000, but regardless of their success or failure, they leave to be replaced by a new player in the following episode.

Lightning starts Monday 25th January at 6.30pm on BBC Two and will be available on BBC iPlayer shortly after broadcast.