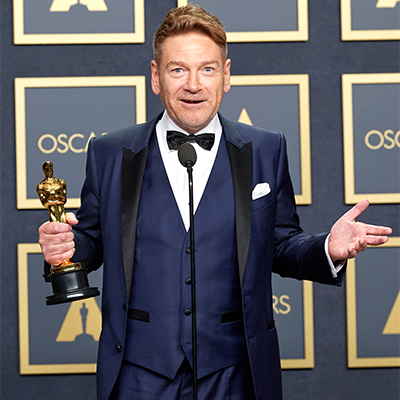 BELFAST was written and directed by Branagh during lockdown and is a poignant story of love, laughter and loss in one boy’s childhood, amid the social and political tumult of the late 1960s. It stars Caitríona Balfe, Judi Dench, Jamie Dornan, Ciarán Hinds and introduces 10-year-old Jude Hill.

Accepting the award, Kenneth Branagh paid tribute to an “amazing city and a fantastic people”.

“This story is a search for joy and hope in the face of violence and loss.”

“We will never forget all of those lost in the heart-breaking, heart-warming human story of that amazing city of Belfast on the fabulous island of Ireland.”

“The global success of Belfast has provided the local film industry in Northern Ireland with a much needed boost after a tough two years. Having a film named after our capital city recognised at the Oscars gives our industry credibility you couldn’t get any other way.”

“The people of Northern Ireland welcomed this film with open arms, we are so proud that Belfast has also been recognised at the most prestigious film awards in the world.”

The full list of winners can be found here.