Groundbreakers: The Man Who Charmed The World on BBC Two NI 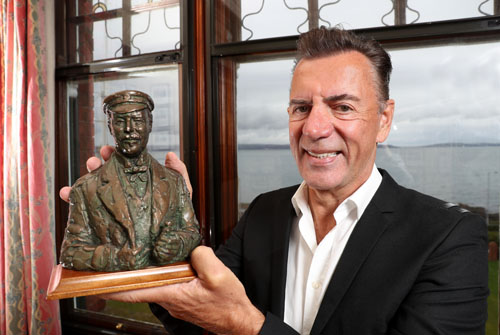 Groundbreakers: The Man Who Charmed The World is the story of an Ulster-Scots legend who, from humble beginnings, established a global retail empire, represented Britain in the Americas Cup and donated his fortune to charity.

Presented by former ‘Dragon’s Den’ star Duncan Bannatyne, this documentary, a Clean Slate TV production, on BBC Two Northern Ireland on Sunday 9 September at 10pm, tells Sir Thomas Lipton’s remarkable rags to riches story while, at the same time, exploring his Ulster-Scots heritage. The programme is a is a co-production with BBC Scotland, with assistance from Northern Ireland Screen’s Ulster-Scots Broadcast Fund.

Sir Thomas Lipton was the product of two established Ulster-Scots families from County Fermanagh – the Liptons and the Johnstones.

Lipton’s father’s ancestors were from the Scottish borders and it is estimated they settled in Fermanagh in the early 1700s, while his mother’s family (Johnstone) were originally from Dumfriesshire and can be traced back to the plantation of the 1600s.

The Liptons moved from Fermanagh to Glasgow to escape the effects of the Irish famine in the mid 1800s, but Thomas never forgot his Ulster roots. He even took his mother’s maiden name as his middle name and became Thomas ‘Johnstone‘ Lipton.

His first job was a deck hand on a Belfast to Glasgow freighter and he would later join the Royal Ulster Yacht Club in Bangor, County Down to campaign his five America’s Cup challenges.

At the age of 15 Lipton sailed to America where he saw the future of the grocery business working for fellow Ulsterman, Alexander Turney Stewart. Five years later he was back in Glasgow opening his first shop and planning a chain of retail outlets across Britain and Ireland that would become the template for the modern supermarket.

As his business grew, Lipton returned to the farms of Ulster to make deals with livestock and poultry producers around his native County Fermanagh to supply his burgeoning chain of grocery stores. The deals he made were revolutionary, guaranteeing prices and encouraging local farmers to expand and form co-operatives to guarantee supply.

Within 10 years Lipton was a multi-millionaire, acquiring tea estates in Sri Lanka and meat processing factories in America. It was Lipton who was the first to package tea in small, convenient tins to keep it fresh.

By the turn of the century, tea was popular on both sides of the Atlantic and in 1904 the invention of the tea bag by Thomas Sullivan sparked a mass-market bonanza which turned Lipton’s business into an empire.

Tea was Lipton’s business but his passion was sailing and he used his fortune to enter a succession of racing yachts to challenge for the Americas Cup – or the ‘Auld Mug’ as he liked to call it. After his applications for membership of the Royal Yacht Squadron was turned down, Lipton campaigned his ‘Shamrock’ yachts under the flag of the Royal Ulster Yacht Club in Bangor, Co. Down. He had his yachts designed and built on the Clyde and sailed by men who learned their trade along the coasts of Scotland and Northern Ireland.

Shortly before he died, the Royal Yacht Squadron accepted Lipton as a member.

In all, Lipton competed for the Americas Cup a record five times but finished second each time. He was deemed such a good sport, that the New York Yacht Club presented him with a gold cup inscribed with: “The gamest loser in the world of sport.

Lipton possessed an extraordinary ability to break down both class and national barriers. He was a close personal friend of King George V and Germany’s Kaiser Wilhelm, as well as eight US Presidents and the Kennedy family. Lipton used his power and influence to build relations between Europe and America and pursue charitable activities.

On his death, Lipton donated his fortune to veterans and nurses of World War One and to the City of Glasgow.