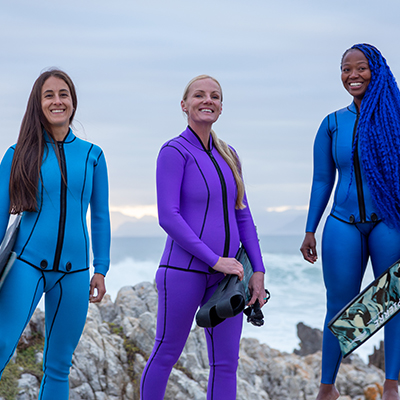 A new documentary by Waddell Media, Shark Women: Ghosted by Great Whites, has its world premiere on Friday 29th July at 10pm ET/PT on Discovery and Discovery+ as part of Discovery Shark Week.

Shark scientist Alison Towner is on a mission. Born and raised in Lancashire, for 15 years she has been studying great whites in Gansbaai South Africa, known to have the densest population of white sharks on the planet. Alison has tagged, followed and written about hundreds of white sharks but has a particular connection with six of them – her killer family. But now her killer ‘family’ of six great whites have vanished without trace. What could have happened to them?

In 2017, great whites began to mysteriously disappear from the region. Alison is determined to track down her missing family and figure out where her sharks have gone. To find out, she has put together a powerful, multi-skilled, kick ass all female team. Shark diver and marine biologist Leigh de Necker has in-depth understanding of great white nutrition and diet. And Zandlie Ndhlovu, ‘The Black Mermaid’, who can get up close and personal with sharks by holding her breath underwater for four minutes. They spark off other as they hunt for the missing sharks around the coast of South Africa.

Jannine Waddell, Executive Producer, Shark Women: Ghosted by Great Whites says: “Alison Towner is one of the world’s leading great white shark experts having featured in many films for Shark Week and I’d worked with her before on a wildlife series for Channel 4. But making a film about apex predators is totally different. It’s scary as nothing is ever predictable and as we found out anything can happen at any moment.

“There were terrifying moments during filming but our three hosts Alison, Zandlie and Leigh really delivered in this spectacular adventure to find out why these great whites have been disappearing from the western cape of South Africa.”

The team start at ground zero Gansbaai the last known location for Alison’s six familiar sharks – Flag, Mini Nemo, Besom, Waddell, Dale and Zane. They first head out to Dyer Island to dive for one of Alison’s acoustic receivers which has been gathering data from any tagged sharks passing through. It’s dangerous – the receiver is lying at the bottom of Shark Alley known as the McDonald’s drive through for sharks. Free diving mermaid Zandile also takes on a perilous dive in the kelp forest where great whites regularly patrol.

Alison’s conclusion is that the great whites are moving away from the Orcas (Killer Whales), who have started coming in to their territory. They are killing the sharks for their livers. The sharks are being driven up the coast. Just after filming in Mossel Bay a pod of Orcas came in and killed at least one great white.

This whole ecology of the ocean is changing and much more support and funding is needed to understand what is going on in our oceans to protect these incredible animals.

Alison’s receiver reveals that sharks are visiting but not staying long. Zandile reports that there are plenty of smaller sharks so lack of food is not an issue. Alison thinks the sharks might be hanging out in the deeper murkier waters so the team heads out to a location never researched before called Haai Bank. They deploy a mega BRUV (baited, remote, underwater video recorder) called Bruvzilla and wait to see what might be lurking below.

The Bruvzilla footage reveals a lone giant white shark miles away from Shark Alley and Alison starts to form a theory. She thinks the white sharks have been escaping from killer whales that have been coming into the region, finding it safer in the deeper, murkier water.

Alison’s next plan is to head up the coast to Mossel Bay. A fellow shark scientist in the area has reported a sighting of her very own Mini Nemo – one of her missing family – and the girls want to investigate the area further. Is this where her missing sharks have ended up? No killer whales have been spotted in this region for a long time.

In Mossel Bay, the team set about trying to get some sharks to breach this will give them the opportunity to take detailed pictures of their unique fins which helps identify them.

The team members each create different seal decoys to try out some scientific theories. Terrifyingly, Alison and Leigh’s decoys get devoured by massive great whites. Later on, when checking the footage and checking the fins, Alison makes an incredible discovery: one of the breaching sharks was in fact ‘Waddell’. Further proof that her killer family has moved up the coast and out of the way of the killer whales.

The team attempts to implant a satellite tag onto a passing large white shark. This tag should provide invaluable information about local shark movement in real time. Alison hopes this could lead her to the rest of her killer family.

Leigh takes the responsibility for working the bait line and luring a great white to the boat, Zandile is in the shark diving cage taking research photos and Alison has to use all her strength to get the satellite tag into a white shark. After some time, they hit gold and tag a massive female shark which the team name Zandy after Zandile.

Zandy, the great white, stuck around Mossel Bay for a couple of weeks but then without warning, just like Alison’s killer family, she disappeared. This was at the same time when a pod of killer whales came into Mossel Bay and killed a great white right in the spot where the girls tagged Zandy.

After a worrying month of no news from Zandy, Alison suddenly got some pings. Zandy had headed way up the coast away from the killer whales to the outskirts of the sardine run in East London.

The team regroup at the sardine run East London – the greatest migration on earth, where billions of sardines travel in shoals up to five miles long causing a feeding frenzy along the coast. Alison now needs to find out if this is where some of her killer family might have headed. To make best use of resources Alison takes to the sky in a microlight while Leigh and Zandile head out to sea ready to dive in to find out what’s going on under the water.

Alison’s mission in the microlight is to be the eyes in the sky. She directs the girls in the boat to the sardine bait balls. All of Alison’s theories start to fall into place when she spots a great white from the sky, adding more proof to her theory that the sharks are heading this way up the coast away from the killer whales.

The mystery of her missing six great whites – it is the killer whales. They are now redistributing the white shark population in South Africa. This is going to change everything for all tiers of marine life along the coast. It is the beginning of a new chapter.