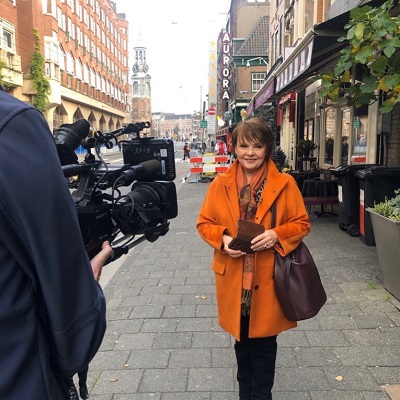 50 years ago, an 18 year old schoolgirl left the Bogside in Derry and headed off to Amsterdam to represent Ireland in the 15th Eurovision Song Contest. What happened that night was to change her life for ever.

Dana the Original Derry Girl, produced by Waddell Media, will air on Monday 11th May at 10:45pm on BBC One NI and 9:35pm on RTE One.

The documentary is an emotional and honest look back at the young schoolgirl’s incredible life story, retracing her steps to the stage of the RAI theatre, where against the odds she became Ireland’s first Eurovision winner.

That win was 50 years ago and the programme looks at the fascinating story of what happened afterwards, including her successful pop and TV career in the 70s; her marriage to Newry hotelier Damien Scallon; her move to Alabama and religious music with performances for the Pope before entering the spotlight of Irish politics.

Dana the Original Derry Girl is an archive rich trip down memory lane, with incredible access and an honest and sometimes raw look at the highs and lows of her incredible career. With contributions from the co-writer of All Kinds of Everything, Derry Lindsay, Senator David Norris, Dave Fanning and many others, the programme ends with Dana joining local choirs on stage in the Guildhall Derry, where she performed as a young girl to take part in a moving version of All Kinds of Everything.

Gareth McGreevy, one of Northern Ireland Screen’s Aim High trainees, marked the special anniversary of the Eurovision win by organising 56 signers and 10 musicians to collaborate a rendition of ‘All Kings of Everything’ with the one and only Dana. Dana dedicated this performance to all health and care workers across the world. You can watch the video HERE.