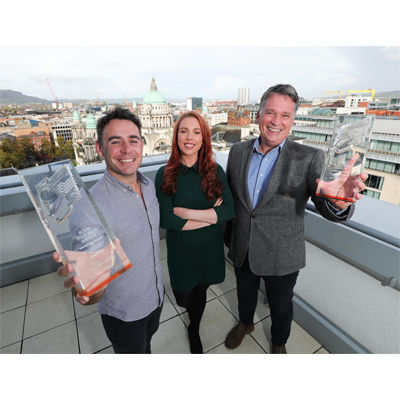 The Royal Television Society, Northern Ireland (RTS NI) is delighted to announce the finalists for its 5th Annual Programme Awards, sponsored by Ka-Boom which will take place in The Mac, Belfast on Thursday 7th November, 2019.

Kieran Doherty, Chair, RTS NI Awards said: “This is the 5th year of our RTS NI Programme Awards and I’m delighted to say we had a record number of entries this Autumn, up by an impressive 50% year on year. Every year the standard gets higher and the judges had a particularly hard task shortlisting the 2019 nominees, given the high quality of documentaries, drama, entertainment, children’s and animation being made in Northern Ireland as well as comedy, news, current affairs, features, music and interactive content. We look forward to showcasing the best programmes and the best people making a positive contribution to Northern Ireland’s creative industries at the Awards next month.”

Richard Williams, Chief Executive, Northern Ireland Screen said: “Northern Ireland Screen is delighted to once again support the RTS NI Awards.  RTS is a long standing and prestigious organisation which we are proud to work alongside.  With awards for everything from current affairs to animation and interactive, the real joy of this event is that it is a rare, if not unique, opportunity for hugely diverse people and companies that make up the screen industry to come together and celebrate their collective creative output and to see the full scale of the industry.”

Maeve McLoughlin, Vice Chair of RTS NI said: “As an educational charity these awards help the RTS to raise awareness of the growing success and innovation of the creative industries in Northern Ireland. You only have to look at the range of wonderful programmes which made this year’s shortlist to see the extraordinary talent evident across Northern Ireland. We wish all those shortlisted the best of luck on the night.”

The RTS NI Programme Awards 2019, with headline sponsor Ka-Boom are delivered in partnership with BBC Northern Ireland, Northern Ireland Screen, Channel 4, and UTV. The Awards Ceremony will be held in The MAC, Belfast on Thursday 7th November, hosted by TV presenter Vogue Williams.

Children’s and / or Animation – sponsored by Clayton Hotel Belfast

Finally, The Brian Waddell Award for Outstanding Contribution (to the local television and film industry in NI)– sponsored by Ka-Boom

Tickets for the Awards are available online until 1st November 2019, priced at £25 each.