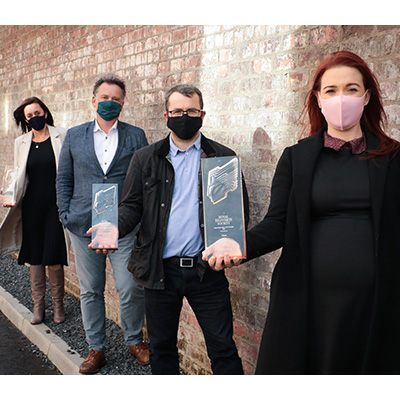 The Royal Television Society, Northern Ireland (RTS NI) is delighted to announce the finalists for its 6th Annual Programme Awards, sponsored by Ka-Boom. The winners will be announced at this year’s virtual awards ceremony which will be shown on the RTS NI website and RTS NI Facebook page hosted by Paddy Kielty on Thursday 12th November at 8pm.

Vikkie Taggart, Chair of RTS NI says: “I’m delighted to say that despite the challenges we’ve had this year, we also recorded our highest level of entries, which bears testament to the resilience and strength of our industry and the amazing wealth of high quality content which has been produced over the past 12 months, often in very difficult conditions. We look forward to showcasing the best programmes and the best people making a positive contribution to Northern Ireland’s creative sector at our virtual awards ceremony next month.”

Zach Willis, Co-Founder, Ka-Boom, headline sponsor of the RTS NI Awards says: “Once again Ka-Boom is delighted to support the RTS NI Awards, especially given the challenges so many of us in the industry have faced since Covid 19 made its presence felt earlier this year. It has been amazing to see the industry pull together to produce so many amazing programmes and we look forward to recognising the best of the best at our virtual awards ceremony in November.”

Maeve McLoughlin, Vice Chair of RTS NI said: “As an educational charity these awards help the RTS to raise awareness of the growing success and innovation of the creative industries in Northern Ireland. You only have to look at the range of stunning programmes which made this year’s shortlist to see the amazing talent that is evident across Northern Ireland. We wish all the nominees the best of luck on the night.”

Richard Williams, Chief Executive, Northern Ireland Screen said: “Northern Ireland Screen is delighted to once again support the RTS NI Awards and we are so happy that they are able to continue this year, albeit in a virtual capacity. I hope that the screen industry will come together online on the night to celebrate their collective creative output. 2020 has been a tough year for our industry but when you look at this shortlist and see the impressive range of content from current affairs to animation, we have so much to be proud of.”

The RTS NI Programme Awards 2020, with headline sponsor Ka-Boom are delivered in partnership with BBC Northern Ireland, Northern Ireland Screen and Channel 4. The Virtual Awards Ceremony hosted by Patrick Kielty will be shown on Thursday 12th November on the RTS NI website and also its facebook page at 8pm via https://rts.org.uk/region/northern-ireland and www.facebook.com/RTSNI.

Children’s and / or Animation

Features and / or Factual Entertainment

Finally, The Brian Waddell Award for Outstanding Contribution (to the local television and film industry in NI) – sponsored by Ka-Boom will be announced on the night.