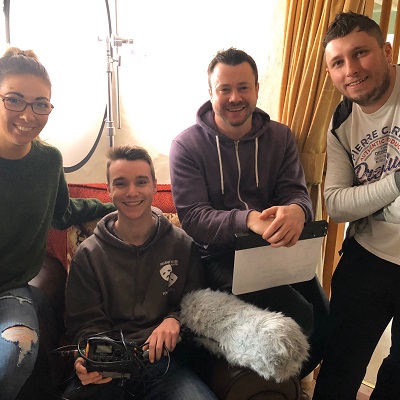 Vikkie Taggart, Chair of RTS NI said: “As an educational charity these awards help the RTS to raise awareness of the amazing home grown talent emerging from our third level colleges which play an increasingly important role in preparing future generations for a career in the local film and TV industry.

“This year’s entries all displayed very high standards of creativity, innovation and technical capability and I know the judges had a difficult task selecting our winners. We wish all our Northern Ireland winners every success in the national RTS Awards in June and look forward to showcasing their winning works at our Programme Awards in November.”

The RTS NI Student Television Awards are supported by Northern Ireland Screen. Head of Education, Bernard McCloskey, said: “Congratulations to everyone who has taken part in this year’s awards. Winning an RTS NI Student Television Award gives these students a prestigious accolade to help them with their future careers. These awards are a great way to nurture and encourage the fantastic creative talent we have in Northern Ireland.”

Maeve McLoughlin, Vice Chair, RTS NI said: “These awards provide an amazing platform to showcase the wealth of young talent emerging from across Northern Ireland in the creative industries. Everyone who takes part is a winner by making the most of the opportunities provided by the RTS to meet potential employers and top professionals who can assist with their careers.”

Sponsored by Carson McDowell, Stellify Media, and Performance Film & Media Insurance, the winners of these Awards go forward to the national RTS Student Media Awards which are planned for June. The winners will also be invited to this year’s RTS NI Programme Awards, where their work will be showcased in front of the top professionals across the screen industries.