‘My Life: My Pigeons and Me’ to air on CBBC 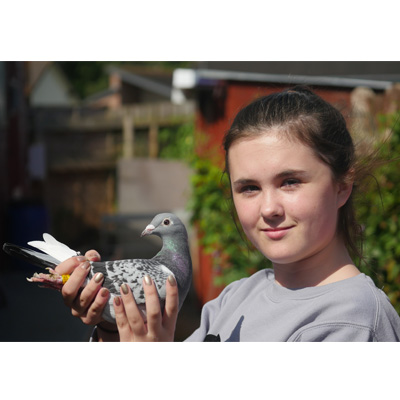 My Life: My Pigeons and Me takes young viewers into the wonderful world of pigeons through the experiences of two young pigeon fanciers.

This uplifting documentary follows 15 year-old Keelie and 12 year-old Aaryan as they navigate the highs and lows of the 2019 racing season and prepare to enter their best birds in the UK’s biggest pigeon show, in Blackpool.

My Life: My Pigeons and Me was produced for CBBC by Tyrone Productions NI and was developed with assistance from Northern Ireland Screen.

Keelie lives in Magheralin in Northern Ireland and was introduced to the historic sport of pigeon racing at the age of four by her dad and grandfather. When she was ten, Keelie became the youngest and first female member of the Lurgan Social Homing Pigeon Society.

Today, Keelie keeps almost 200 birds at her grandad’s lofts. The film reveals how this unlikely hobby has strengthened the bond between the teenager, her dad and her 86-year-old grandad, and allows them to spend many hours together as they look after their birds. Keelie talks us through preparations for the racing season and we capture the amazing spectacle as 25,000 birds are released at the start of a race in Fermoy, County Cork.

Meanwhile in Rochdale, both of Aaryan’s grandfathers were keen pigeon fanciers and he’s determined to keep this family tradition alive.

Keelie and Aaryan’s journeys culminate in Blackpool when they compete in the prestigious Royal Pigeon Racing Association Show of the Year. Can they keep their composure as the judges scrutinise their pigeons? There’s exciting news when Keelie is also awarded the coveted UK Young Pigeon Fancier of the Year trophy for her work during the past season.

My Life: My Pigeons and Me will be broadcast on CBBC on Tuesday 25th February at 5.30pm and 7.35pm as part of the award-winning My Life series.