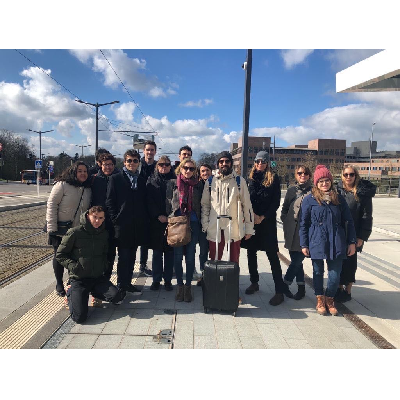 Galway Film Fleadh have today announced the launch of a new Festival Network.

The primary purpose of the network is to formalise a system for sharing information, strategies and culture amongst festivals that will represent a strong voice in Europe. It will shape, develop, reach and agree common positions and perspectives on key issues. The network will be able to develop resources, business models, best practices and information exchange infrastructures to support members in the emerging film ecosystem, providing a unique opportunity to strengthen film festivals.

Speaking about the network, Miriam Allen, EFF Chairperson and CEO of the Galway Film Fleadh said, ‘We are very excited to present our network and look forward to contributing to the important work that the Europa Film Festivals can achieve together in the future.’

Alexis Juncosa, Artistic Director, of the Luxembourg City Film Festival and Vice-Chair, said of the launch, “We are extremely pleased to take part in this initiative, borne out of the joint desire to form an association that combines forces to benefit from the unique dynamics of all the festivals involved. We are hoping that this federation will become a solution-oriented partner for dialogue and new ideas. The goals and ambitions of this European association are now being finalized and a specific communication should be ready around The Marché du film Online and Galway Film Fleadh”.

Europa Film Festivals intend to maximise the broad experience, knowledge and creativity of its members in a sustainable and ever-evolving network. In cooperation with Galway 2020 and the Galway Film Fleadh, EFF member festivals will co-curate ‘Peripheral Visions’ a competitive programme of films with the themes ‘Language, Landscape and Migration’. The programme will be available to view online during the Galway Film Fleadh, 7th-12th July and the winning film will receive €3000.

Marilyn Gaughan-Reddan, Head of Programme at Galway 2020 commented, “The team at Galway 2020 are delighted to partner with Galway Film Fleadh on Peripheral Visions, a very significant pan European project for our programme as a European Capital of Culture. We would like to congratulate the Fleadh for producing an incredible event, we are looking forward to seeing years of work come to fruition.”