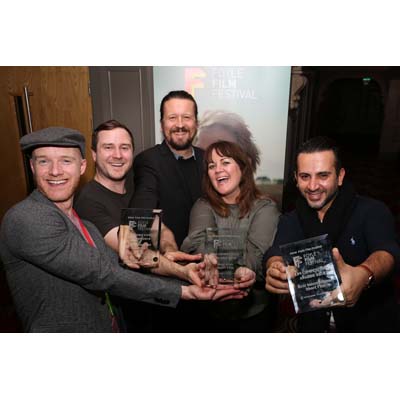 The 32nd Foyle Film Festival drew to a close last night (Sunday 24th November) with the announcement of the Light in Motion competition winners in Derry-Londonderry. The festival is celebrating 20 years of Oscar® affiliation and 10 years of BAFTA recognition with a bumper programme of International and Irish short films and Animated Short films from across the Globe.

Kerry born filmmaker Shaun O’Connor’s short film A White Horse is further on in consideration for Oscar® shortlisting, after being selected as the winner of Best Irish Short. A White Horse, which was produced by Sinead Barry, won the ARRI Alexa Take/ Screen Directors Guild of Ireland Script award for this year.

Written by Shaun O’Connor along with Paul Cahill, A White Horse gives voice to the hidden histories of Irelands fallen women who fought back against the institutional correctness of Ireland over the last 40 years.

The winner of the Best International Short, Funfair, will also qualify for further consideration at the 2019 Academy Awards. Funfair is directed by Kaveh Mazaheri and produced by Soroush Saeidi who was at the Brunswick Moviebowl to collect the award.

Funfair tells the story of Majid, a young financially struggling man who comes up with a ploy in order to better the life of his wife Sarah. Kaveh Mazaheri has had previous festival success with his film Retouch in 2017 which won at the Tribeca, Krakow and Palm Springs Film Festivals.

The award for Best Animated Short Film went to Hungarian director Géza M. Toth who was previously nominated for an Oscar in 2007. Matches was praised by the Jury for its achievement in the complexity of the imagery in the animation process.

The awards, sponsored by City of Derry Crystal, were presented ahead of the Closing Night Gala screening of The Last Right in Brunswick Moviebowl, bringing to a close ten days of premieres, special events and industry networking. This year the Oscar®-affiliated festival welcomed a host of special guests that included BAFTA Winning producer Jeff Pope and Oscar nominated screenwriter William Nicholson.

Foyle Film Festival’s festival director, Bernadette McLaughlin, said: “We are delighted to present these three deserving films with our prestigious Light in Motion award. We’ve been privileged this year to enjoy a really impressive array of short films and animations from some 23 countries around the world.  Over ten days we showcased more than 120 films, including 87 shorts as part of the Light in Motion Awards.

“I’d like to thank all our competitors for sharing their work at Foyle Film Festival, our incredible Festival juries for their dedication and commitment and we wish our Winnersall the very best in their careers going forward”.

Foyle Film Festival is funded by the Department for Communities through Northern Ireland Screen and by Derry City and Strabane District Council.  Venue partner is Brunswick Moviebowl.