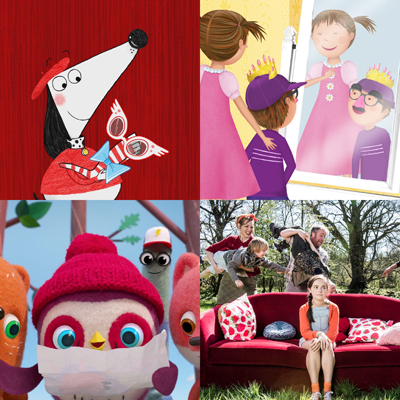 Four projects made in Northern Ireland with funding from Northern Ireland Screen have been nominated for the 2020 Kidscreen Awards. Now in their 11th year these prestigious Awards honour the best work in children’s television and digital media.

Two projects from Sixteen South have been nominated in the Preschool Programming category. Claude has been nominated for Best Animated series. Claude follows the humorous adventures of a little beret-clad dog and his faithful sidekick, Sir Bobblysock, in the seaside resort of Pawhaven – home to an eccentric mix of eccentric characters and colourful visitors.

Pinkalicious and Peterrific (episode A Pinkaperfect Birthday), a collaboration with WGBH, is up for Best One-off, Special or TV Movie. The animation is based on the best-selling Pinkalicious book series, designed to encourage children aged 3-5 to engage in the creative arts and self-expression.

Becca’s Bunch, created by JAM Media, will be battling it out for Best Mixed-Media Series in the Preschool Programming category. Becca, a little bird, and her bunch of friends go on adventures in the Wagtail Woods which leads the group to a few sticky situations. Becca’s unique and brilliant ideas where her positive thinking and leadership skills shine through encourages her friends to defeat the dilemmas.

Secret Life of Boys has been shortlisted in the Kids Programming category for Best One-off, Special or TV Movie for the Ethan Vs/ The Posers episode. The show, created by Zodiak Kids Studios, tells the story of smart, nosey and resilient 11-year-old Ginger Boxwell who goes on a quest to find out what boys are really like and what they get up to in secret.

Speaking about the award nominations announcement, Richard Williams, Chief Executive of Northern Ireland Screen said: “We are absolutely delighted to hear that Sixteen South, JAM Media and Zodiak Kids are nominated for the Kidscreen Awards alongside the major global names in children’s programming. This is a testament to all of the hard work that goes into creating shows such as Claude, Pinkalicious and Peterrific, Becca’s Bunch, and Secret Life of Boys. We wish all of the companies the best of luck at the ceremony in February.”

Winners will be announced at a special presentation event at Kidscreen Summit in Miami on Tuesday 11th February 2020.