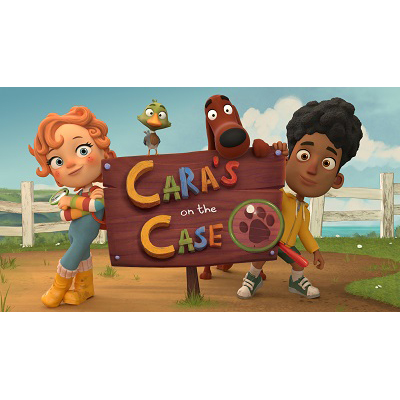 Cara’s on the Case is a new preschool animated nature detective series concept which has been selected to showcase at the prestigious Cartoon Forum pitching and co-pro conference which takes place in Toulouse, France this week (16 – 19 September).

The series is being developed by Flickerpix with funding from Northern Ireland Screen. Flickerpix is the animation arm of leading independent television production company Waddell Media, and has previously produced award-winning animation creations which have appeared on CBBC, Channel 4, Sesame Street USA, BBC, Discovery, RTE and ABC amongst others.

Jannine Waddell MBE, Managing Director, Waddell Media says:  “We are delighted that Flickerpix has the opportunity to pitch their fabulous new animation pilot Cara’s on the Case at Europe’s leading forum for animated TV projects. Our producers will have the unique chance to introduce Cara to an impressive range of broadcasters, investors and other potential partners from 40 countries. Since its creation in 1990, 774 series have found financing through this forum and we’re really hopeful that this unique Flickerpix concept makes its mark in the animation industry, as the feedback we have received so far shows that the series has huge potential internationally with strong economic and commercial prospects.”

Created by Flickerpix’s Creative Director Johnny Schumann and Producer Sarah McCaffrey, Cara’s on the Case follows the adventures of 6-year-old Cara and her detective gang, the Clover Club, as they solve everyday problems in the natural world around them. Taking place in the fictional coastal village of Tullybay, the series’ art design has been influenced by various seaside villages in Northern Ireland.

Johnny Schumann says: “Cara’s on the Case is a fun and entertaining series, which we believe will encourage kids to join forces with detective Cara as she solves mysteries thrown up by the natural world around her. Cara may come from a small Irish village, but the issues she confronts are universal. It’s a unique concept celebrating friendship, diversity and the importance of nurturing in the world around us.”

Sarah McCaffrey, Producer, Flickerpix says: “Cara’s on the Case is a unique animated educational series for kids in an area which we believe is currently under explored by the market. It has been warmly received by key international broadcasters in the industry to date. We hope to impress the animation industry at Cartoon Forum and look forward to bringing Cara to life.