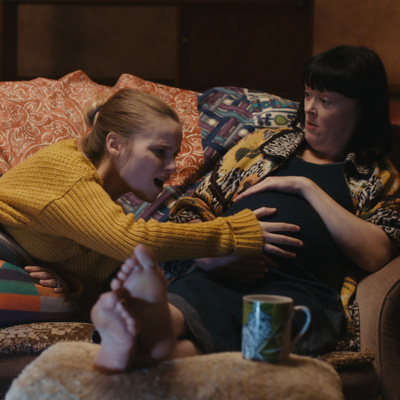 A Bump Along the Way has been confirmed in official selection at the prestigious Toronto International Film Festival (TIFF) where it will have its international premiere. Funded by Northern Ireland Screen and filmed entirely on location in Derry A Bump Along the Way is a heart-warming comedy led by an all-female team consisting of director Shelly Love, writer Tess McGowan, producer Louise Gallagher and executive producer Roma Downey. A few weeks ago it was revealed that Lisa Barros-d’Sa and Glenn Leyburn’s Ordinary Love would have its world premiere at TIFF.

A Bump Along the Way tells the story of fun-loving, 44-year-old single mum Pamela who becomes pregnant following a boozy one night-stand with a man half her age, much to the shame of her buttoned-up teenage daughter Allegra. As Pamela deals with her unexpected pregnancy and the growing pains of the disgruntled Allegra, the challenges they both face ultimately bring mother and daughter to a better understanding of themselves and each other.

Starring Bronagh Gallagher (Pulp Fiction, The Commitments) and Lola Petticrew (Come Home), A Bump Along the Way was developed through Northern Ireland Screen’s New Talent Focus scheme and was funded by Northern Ireland Screen and Yellowmoon. Earlier this year the film opened the Belfast Film Festival and screened to rave reviews at the Galway Film Fleadh where it took home the Best Irish First Feature Award and, Lola Petticrew picked up the Bingham Ray New Talent Award.

Director Shelly Love said; “I couldn’t be more delighted that A Bump Along The Way will have its International Premier at TIFF. It is such an honour to have our first feature film screen at such a prestigious festival. Our film is a love story about a mother and daughter, I hope it charms the socks off audiences with its heart felt moments and Derry wit.”

Producer Louise Gallagher said; “I am absolutely thrilled that A Bump Along the Way has been selected for TIFF 2019. I have been overwhelmed by the warm response the film has received to date, and to have our first feature selected for such a prestigious festival is a huge honour. I’m looking forward to my first trip to Canada and cannot wait to screen for the audiences in Toronto.”

Richard Williams, CEO of Northern Ireland Screen, said; “We could not be more proud of Shelly, Tess and Louise, having your debut feature film selected for one of the most prestigious film festivals in the world is no mean feat. We offer huge congratulations to all the cast and crew involved.

We couldn’t ask for a better platform than Toronto International Film Festival to showcase our local talent. Audiences at the Festival are in for a real treat with two fabulous Northern Ireland films screening there this year.”

Element Distribution has picked up rights to A Bump Along the Way in Ireland and UK and will release the film in theatres on 11th October.