A Bump Along The Way now available on demand 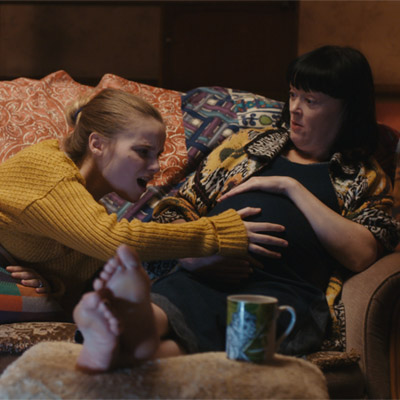 A Bump Along The Way the “hilariously funny movie with maximum feel good factor” starring Bronagh Gallagher and Lola Petticrew is now available on demand in Ireland and the UK.  Viewers can stream or download-to-own this award-winning “wee gem” from a host of major platforms, including iTunes, Amazon, Google Play, Sky Store, Virgin Media Ireland and Volta.

A Bump Along The Way tells the story of fun-loving, 44-year-old single mum Pamela (“Bronagh Gallagher is utterly brilliant”) who becomes pregnant following a boozy one night-stand, much to the shame of her buttoned-up teenage daughter Allegra (Lola Petticrew).  As Pamela deals with the prospect of becoming a mum for the second time and the growing pains of the disgruntled Allegra, the challenges they face along the way bring mother and daughter to a better understanding of themselves and each other.

Theatrically released to much critical acclaim following its Galway Film Fleadh Best First Irish Feature win and it’s international premiere at the prestigious Toronto International Film Festival A Bump Along The Way was also BIFA shortlisted for the Raindance Discovery Award.  Stream or download now what critics are calling a “thoroughly enjoyable and hugely relatable film”.