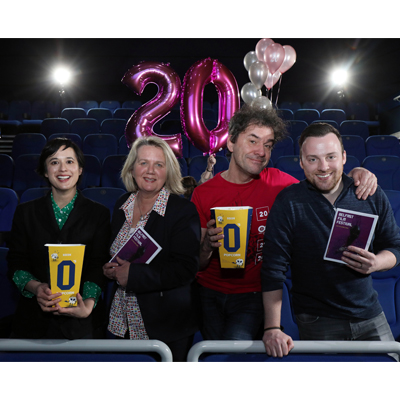 Belfast Film Festival celebrates its 20th year as it launches a programme packed with award winning guests and special events.

The programme launches today and will run from 1-9 April. Organisers hope to draw a record number of people to the city for the 2020 programme, full of premieres, new local film, special events and international guests.

The 20th annual festival will showcase 114 screenings and events including a range of creative and interactive activities over the 9-day period, kicking off with the Irish premiere of 1990’s inspired comedy drama Our Ladies, which will be introduced by director Michael Caton-Jones.

Special guests include multi award winning star of theatre, film and television, Lesley Manville (Phantom Thread, Ordinary Love). Lesley is an Academy Award nominee and is currently starring in the National Theatre production of the critically acclaimed production, The Visit.

Film and TV lovers will also have a chance to attend an ‘In Conversation’ event with BAFTA winning writer and producer, John Lloyd, (Blackadder and The Hitchhikers Guide to the Galaxy). Oscar winning producer, Jeremy Thomas (The Last Emperor) will participate in a special event with filmmaker Mark Cousins. Actor, Michael Smiley (Luther, Spaced) will be in town as well as Kim Newman (film critic and writer), and Academy Award winning cinematographer Christian Berger (The White Ribbon) will host a masterclass for a small group of lucky aspiring filmmakers.

The programme will showcase new feature films from around the world including Mark Cousin’s epic 14 hour Women Make Film – an exploration of cinema history through the lens of some the world’s greatest directors – all women; Arracht a tense Irish drama/thriller set in 1845 on the eve of The Great Hunger, from directors Tom Sullivan and Tomás Ó Súilleabháin and Adam, from Moroccan director Maryam Touzani’s which made its international debut at last year’s Cannes Film Festival.

Movie fans can expect the usual range of the weird and wonderful in the popular Altered States strand and there will be live and interactive film inspired events including The Red Balloon at the MAC with live soundtrack from French musicians, François Ripoche, Lætitia Shériff and Stephanie Louvain. Say Amen, Somebody with the Belfast Gospel Choir will take place in the atmospheric surroundings of Rosemary St Church, and Footloose will kick off in the Titanic Ballroom.

The festival will close with the hotly anticipated Black Medicine, a thriller filmed in Northern Ireland which is the debut feature of director Colum Eastwood who is the latest film-maker to come through Northern Ireland Screen’s New Talent Focus Scheme.

“I am thrilled to unveil the programme for the 20th Belfast Film Festival. It includes an eclectic mix of international and local talent, with a wide range of special events, from a Footloose extravaganza at the Titanic Ballroom to an in-conversation event with one of the greatest actresses of our time, the wonderful Lesley Manville.”

“Over the past two decades we have seen Belfast Film Festival grow from strength to strength, showing off the very best of indigenous film-making talent and introducing international talent to the City.

“Since the launch of the festival in 2000, the film and TV industry in Northern Ireland has flourished and we have world-class film and TV projects now filmed here by the likes of HBO and Netflix. This has not happened by accident and our sector has been working steadily over the past two decades to ensure Belfast is an attractive location for production companies to make films.

“We might be small, but our talent and abilities far exceed our size. The sustained growth of Belfast Film Festival year on year also shows the passion and desire for quality cinema here in Belfast.”

“Every year we see our audiences increase in size and diversity. Last year, we brought global Indian film sensation Aamir Khan to Belfast, which helped introduce our local Indian community to the film festival. We want to continue to welcome a range of new audiences and showcase Belfast as the culturally diverse and welcoming city it can be, where so many of us have a great love for film that we can celebrate together.”

1 April – Opening night film, Our Ladies by Michael Caton-Jones at the Odeon

2 April – The Red Balloon Live Soundtrack at The MAC

8 April – Lesley Manville in conversation at The MAC

Festival Pass and Tickets can be purchased at: www.belfastfilmfestival.org.