Belfast festive film is Christmas No.1 in ‘Top 10 most watched films you have never heard of’ 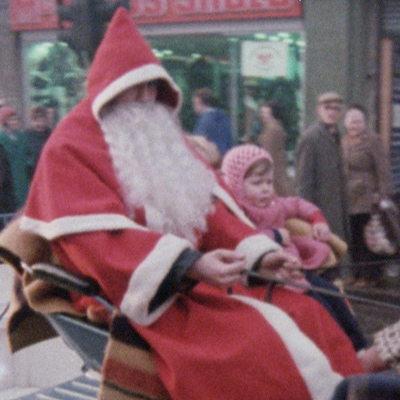 A government-made film featuring the unique circumstances of Belfast at Christmas during the height of the Troubles is most watched local film in a unique archive made possible by National Lottery Funding.

The 1977 piece includes scenes of traditional festive images alongside military and security activities.

It is part of the British Film Institute’s (BFI) Britain of Film, an online archive of more than 10,000 films which has amassed 75 million views since its launch in 2015.

Among the other popular films in the Northern Ireland top 10 are a documentary about the Hunger Strikes, footage from Orange marches, a feature on the building of the M1 and rare scenes of local punk legends The Undertones and Stiff Little Fingers in their heyday.

Christmas in Belfast (1977) and Belfast – No Way Out (1970), a current affairs documentary by the This Week team examining poverty in Belfast at the outset of the Troubles both make the UK Top 10.

He said: “Britain on Film is an ambitious project that has made the rich unseen film history of the UK accessible to the whole nation, with thousands of titles from 120 years’ worth of films drawn from the BFI National Archive and regional and national archive partners from across the UK from Victorian times to the 1990s.

“Whilst you or I may never have heard of them before and they will never trouble the weekly box office lists, the films have captured the imagination of the public and amassed an incredible 75 million online views. They are incredible and are a wonderful way to get lost in our history and heritage for an hour, or even a day. I love it, and all thanks to those pink tickets at newsagents. Who knew?”

Francis Jones, Heritage and Archive Manager at Northern Ireland Screen added: “Britain on Film has made a significant contribution to Northern Ireland’s cultural heritage, enriching the content of our Digital Film Archive and increasing public access to that content.

“The films we unearthed through this project trace the arc of moving image history, and our society, over the course of the Twentieth Century: The Agony of Belfast, a newsreel depicting the conflict of 1920, the nostalgic Scenes from the Northern Ireland Tourist Board (1958), amateur films, such as Building of M1 at Stockman’s Lane (1961), landmark documentaries, Belfast No Way Out (1970), or government films such as Christmas in Belfast (1977). Everyday life and historic events, a multitude of stories preserved for future generations.”

The National Lottery has invested £8.7 million into over 218 film-related projects in Northern Ireland over the past 25 years, from independent films to community film clubs.

In addition, it has funded the production of films in Northern Ireland working with Northern Irish filmmaking talent and crews including Ordinary Love, Wildfire, High-Rise and Philomena. And it has helped 432 young people from Northern Ireland learn about working in film through the BFI Film Academy.

Britain on Film is an ambitious project- one of the largest and most complex archival projects ever undertaken by the BFI and one of the most successful with over 75 million online views to date, 78% of those outside of London and the South East having launched in 2015. It has made over 10,000 titles from 120 years’ worth of films available to the British public for free, drawn from the BFI National Archive and regional and national archive partners from across the UK.

The Top 10 most watched films in Northern Ireland through Britain on Film:

Traditional holiday activities and images – Santa on his sleigh, the tree outside City Hall, a children’s choir – are punctuated by reminders that not all is as it should be. British Army jeeps prowl the streets and shoppers make small talk as they have their bags searched at security checkpoints.

The film concludes with interviews with religious representatives of the Catholic and Protestant communities. Despite the difficulties that are apparent, they sound a note of optimism and envisage better times ahead. This government film is a public record, preserved and presented by the BFI National Archive on behalf of The National Archives, home to more than 1,000 years of British history.

Rows of red brick terraced houses, streets filled with children playing, hide lives of hardship in this programme focussing on the poverty and housing conditions in Belfast – often underreported due to the Troubles. Typically for This Week, the programme addresses social problems instead of superficial prejudices, and the result is a heart-breaking portrait of people struggling to survive.

Made to be used in the campaign for “political status for Irish prisoners of war” in the Maze (formerly Long Kesh) Prison, who began a hunger strike in October 1980. Watch interviews with former hunger strikers and see Bernadette Devlin addressing a Belfast rally in support held on October 26th, 1980. Joe Maguire hopes his story can travel where he cannot, due to the Prevention of Terrorism Act. In the same year Section 11 of this Act is used to seize a BBC Panorama film of the IRA.

Additional interviewees include a spokeswoman for Relatives Action Committee, Tom Hartley (Chairperson, Belfast Sinn Fein) and the fathers of some of the hunger strikers. They relate in graphic detail the physical and emotional changes that their sons have undergone and their determination “to go on to death”. This material comes from the BFI collection. Information on Ireland also produced a series of pamphlets on the situation in Ireland including ‘The British Media and Ireland’ and ‘They Shoot Children: the use of rubber and plastic bullets in the north of Ireland’.

Travel from the walls of Derry to Bangor’s Pickie Pool with these gems from 1958. Across the north crowds flood the streets to see the Queen Mother, preach and march. At the Ballyclare May Fair fairground rides and bartering continue into the golden light. Huge sand dunes dwarf tiny bathers that brave the freezing Irish Sea. In south Belfast the 12th July Parade pass smouldering remains of bonfires. From the roof of City Hall glimpse the hill that inspired Gulliver’s Travels.

These rushes are amongst a wealth of footage generated by the Northern Ireland Tourist Board. This government department had their own staff that documented the region through stills and moving images capturing various facets of life in Northern Ireland. The department was particularly busy in the mid-1950s to late 1960s, creating films that aimed to sell Northern Ireland as a holiday destination. This material captures Northern Ireland at an intriguing time, post-World War Two and pre-Troubles. It features the Queen Mother’s visit to Bangor and Queen’s University Belfast, the Portstewart Convention and Canada’s Tobermore Sons of Ulster Flute Band join the 12th of July Parade in south Belfast.

This film opens with brief scenes of the burnt-out Brown Trout bar. It soon switches to document the annual 12th of July parades to mark the victory of the Protestant king, William of Orange, over the Catholic king, James II, at the Battle of the Boyne, in 1690. The scenes of Orangemen, bands and bunting are typical, but particularly evocative of the era.

Ireland’s first motorway before it officially opens. Prepare to be thrown as he flagrantly ignores the no entry signs and drives the wrong way up the new slip road. Whatever the weather fly down the M1 from the filmmakers home at Stockman’s Lane to the Broadway roundabout.

The M1 is Northern Ireland’s first and longest motorway. An urban myth was circulated that the straight sections of the M1 were built so that the US Air Force could use them as supplementary runways if war broke out with the Soviet Union. Plans for the motorway were announced in 1946 but work only began in 1959. The filmmaker lived in the house visible in the footage and lost most of the garden to the new M1. He filmed the construction before selling his home to the Ministry. This first stretch opened without ceremony on 10th July 1962. The RUC instigated a vigorous campaign to educate people on how to use the new motorway. Northern Ireland remained free for years from the 70mph speed limit that was introduced in the UK.

All the raw energy and excitement of the 1970s punk rock scene in Northern Ireland is on display in this cracking music documentary. Derry heroes The Undertones and the uncompromising Belfast band Stiff Little Fingers both feature, as do the less well-remembered Rudi, The Outcasts, The Idiots, Protex, Parasites, Victim and Rhesus Negative, while young fans talk about overcoming sectarian divisions to come together and live their lives their own way, united by music.

A thronged Portrush is the site of the annual 12th of July celebrations to mark the victory of Protestant King William of Orange over Catholic King James II at the Battle of the Boyne (1690). A procession of Orange lodges parade through streets bedecked with British flags and bunting. Banners commemorating the historic events are held aloft whilst bandsmen play their instruments.

This reportage from a Belfast ravaged by Ireland’s original ‘Troubles’ is indelibly raw and impressively economical. In just three minutes it paints a portrait of a city marked by communal tension, child poverty, violence by adults and children (specifically, loyalist attacks on Catholics), a military presence and people forced from their homes.

This item was part of the short-lived Irish Events series which ran from 1917 to 1920, then the only newsreel produced in Ireland – making for fascinating comparison with the extensive coverage of Irish during the same period by London-based British newsreel companies.

Ballinascreen is a pragmatic study of changing ways of life in a Catholic parish. Terence Mc Donald’s camera is drawn to the faces of a community in action in agriculture, industry and at play. He invites you to all manner of social gatherings from barefoot pilgrimages to competitive tractor driving. Disappearing skills are revived by new generations competing with their elders. Then after a musical interlude from the Seamus Kerrigan Dance School we meet a young John Hume.