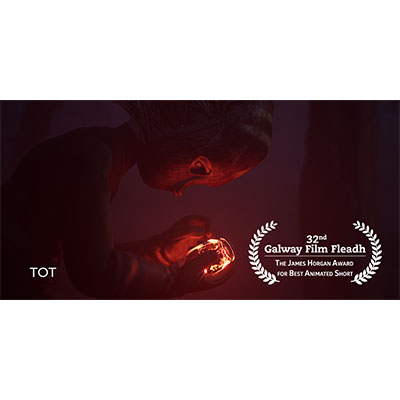 On Sunday July 12, 2020 the 32nd edition (and first ever online edition!) of the Galway Film Fleadh came to a close after another outstanding year of film premieres, events and discussions. The annual awards ceremony was live-streamed online before the closing film Arracht.

TOT, a creative animation short film funded by Northern Ireland Screen, won the James Horgan Award for Best Animation Short. The animation is directed by Tom Getty, Aimee Kirkham Priester and Fiona McLaughlin, produced by Tom Getty and Fiona McLaughlin. After the death of her father, Tot roams through a mystical world carrying her grief with her as she searches for closure.

Speaking during the launch Maureen Kennelly Arts Council Director said, “During the last six days your sterling programme has transported us to other worlds, but you remained true to yourselves in being a platform for Irish film showcasing the work of filmmakers at all stages of their careers”.

The winners are as follows:

Best International Documentary Short : No Crying At The Dinner Table by Carol Nguyen

The Tiernan McBride Award for Best Fiction Short in association with Network Ireland Television:  The Invisible Boy by James Fitzgerald

Best Short Documentary Award in association with TG4: How to Fall in Love in a Pandemic by Michael-David McKernan

The winner of the 2020 Pitching Award is Alice McDowell for Rain Song.

The winner of the 2020 Bingham Ray New Talent Award, in association with Magnolia Pictures is Edwina Casey, producer Here Are the Young Men and director Algorithm.

The Awards Ceremony and all other live events, Q+A’s and panel discussions from the 32nd Galway Film Fleadh are available to watch back by clicking here.