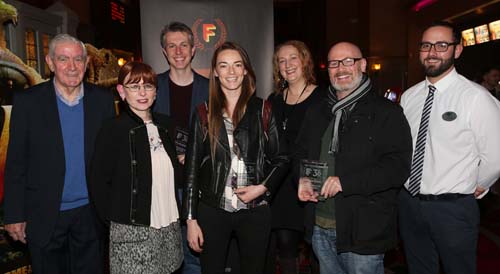 The 30th Foyle Film Festival drew to a close last night (Sunday 26 November) with the announcement of the Light in Motion competition winners in Derry~Londonderry.

The festival is one of only a handful of International festivals with Oscar® affiliation and BAFTA recognition.

Irish filmmaker Steve Kenny’s short film Time Traveller, is in contention for an Oscar®, after being selected as the winner of Best Irish Short. The film, featuring actor Barry Ward tells the heart warming story about a Back To The Future obsessed traveller boy who strives to build his own DeLorean replica before his family are evicted from their halting site.

The winner of the Best International Short, Catch of the Day, will also qualify for consideration at the 2019 Academy Awards. Catch of the Day is a directorial debut for Welsh filmmaker Geraint Reyonds. The film tells the story of Dylan who is caring for his dying wife Gwen as he relives bitter-sweet memories of their life together.

The award for Best Animation went to Derry director Tom Collins for An Béal Bocht (The Poor Mouth), an animated adaptation of Flann O’Brien’s only novel written in Irish. An Béal Bocht is a biting satire of the life of a young Gael reflecting on his life from Sligo Gaol. The film also picked up an award at the Galway Film Fleadh earlier this year for Best First Animation.

The awards, sponsored by City of Derry Crystal, were presented ahead of the sold-out Closing Gala screening of The Man Who Invented Christmas in Brunswick Moviebowl, bringing to a close ten days of premieres, special events and industry networking. This year the Oscar®-affiliated festival welcomed a host of special guests that included Richard E Grant and Jim Sheridan to mark the milestone 30th anniversary.

Bernie McLaughlin, Director and Programmer of the Foyle Film Festival, said: “We are delighted to present these three deserving films with our prestigious Light in Motion award. We’ve been privileged this year to enjoy a really impressive array of short films and animations from some 23 countries around the world.  Over ten days we showcased more than 100 films, including 55 feature films and 70 shorts.

“I’d like to thank all our competitors for sharing their work at Foyle Film Festival and we wish them all the very best in their careers going forward.”

Foyle Film Festival is funded by the Department for Communities through Northern Ireland Screen and by Derry City and Strabane District Council.  Venue partner is Brunswick Moviebowl.